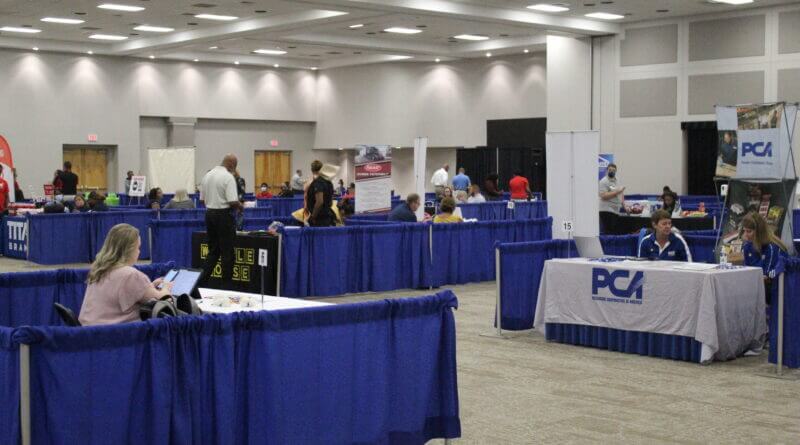 For reasons some still can’t completely understand, gone are the days of job seekers beating the streets and knocking on doors looking for work. Instead, employers are the ones advertising job openings and attending any job fairs available, seemingly offering to hire most anyone who enters to apply.

According to the U.S. Bureau of Labor Statistics, Mississippi’s seasonally-adjusted unemployment rate in July was 6.1 percent, a number that has stayed fairly steady since February.

The last reported unemployment rate for the Memphis Metropolitan Statistical Area, including Arkansas, Tennessee, and Mississippi, was 7.5 percent in June, a big jump of 1.2 percent unemployed from the May 2021 figure.

That said, Adam Todd of the Governor’s Job Fair Network said there are employers needing workers now, which was the reason for another job fair event Thursday at the Landers Center in Southaven.

Forty-five companies, mostly from the Mid-South area, set up inside the Landers Center, ready to talk with prospective employees, answer questions, and in some cases, interview and hire on the spot.

Todd said there have been 15 job fairs conducted already this year by the Network, part of the Mississippi Department of Employment Services, and the events have taken place all across the state.  The jobs are open in many industry areas.

“There’s a need overall,” said Todd. “There is a need in the nursing and medical field and in just about every industry you can think of. Hospitality to medical to manufacturing, it’s a very eclectic group that needs a position to be filled.”

Making the trip to Southaven all of the way from Gulfport and the Gulf Coast was Harrison County Sheriff’s Office recruiter Lt. Robert Lincoln, who said he has been part of several Job Network events in the state. Lincoln said the search has gone to all sections of Mississippi.

“We are looking for people to serve in corrections or serve on patrol, either being on the street or in our schools, or any other various openings,” Lincoln said. “A lot of people I run into from this year have been down to the coast, they like the coast and are very supportive of the coast. We’d like to offer them a full-time vacation job down there.”

“I believe that for our quality of life to continue to stay high, we have to be able to help companies remain open and operating,” King said. “I think in today’s market, companies have to sell themselves, to share their culture and show how they take care of their people, because that is important for people to know that they are more than a number.”

“Right now is the best time to be looking for a job,” Todd added. “There are so many options out there today.”