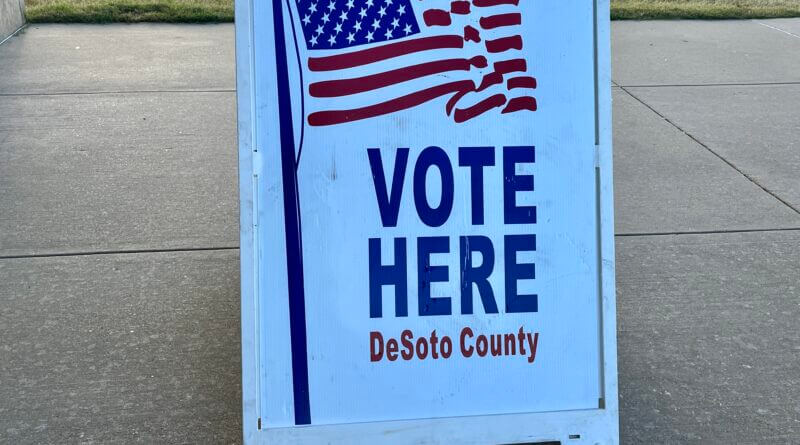 Here are the contested races in DeSoto County we will be following tonight here on this page. There were other races on the ballot but they were all with candidates without opposition.

Return and refresh this page frequently as these numbers will be updated as new vote totals are provided by county election officials.

During the evening below the vote totals, we will update you on other items connected to tonight’s election.

(10:35 p.m.) Still waiting on three precincts to report. We’ve heard the Lewisburg precinct had people still waiting in line to vote at 8:30 p.m.

(9:35 p.m.) Eight precincts remain to be reported in DeSoto County.

(9:10 p.m.) New vote totals are in. Josh Sullivan has won election to the DeSoto County School Board over James “Eric” Wright. The Hernando “Coins for Kids” vote still trails with less the 50 percent voting in favor of it. Sixty percent approval is needed to pass.

(8:25 p.m.) First report has come in with 30 precincts out of the total of 42 precincts. We will only note the other races when they are final. The big surprise to this point has been the Hernando “Coins for Kids” levy vote. Sixty percent is needed for passage and at this point it is trailing to get a majority vote.

(8:10 p.m.) Still waiting for the first official vote numbers to be provided. We’re here at the courthouse and will let you know when we do.

(7:00 p.m) We’ve a number of reports of long lines and ballot shortages at polling places in the county today. Paper ballots have had to be sent out to different precincts. Each precinct was allowed two of the new ExpressVote units and with the large turnout and supply issues, casting ballots became difficult in some locations.

Hundreds of extra ballots had to be printed at the Circuit Clerk’s office and then distributed to the precincts in need to cover the higher than expected turnout.

WREG-TV also reported that 35 voters were given paper ballots initially at a Horn Lake precinct because the ExpressVote machine at first was not working.