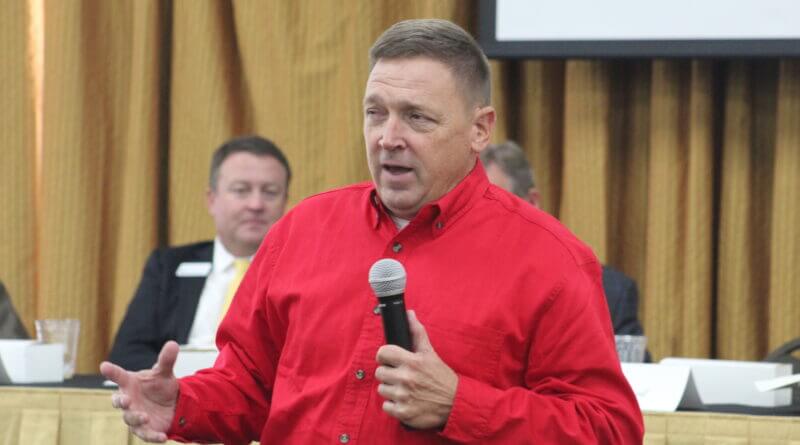 Northern District Transportation Commissioner John Caldwell did not come to a recent DeSoto County Economic Development Council quarterly luncheon to say that all of the road projects important to DeSoto County would be done within the next few months at a cost saving.

The first-term Transportation Commissioner from Nesbit instead brought sobering news about why projects, such as the widening of state Highway 305 south from Olive Branch and the I-55 widening between Goodman and Church Roads in Southaven, take seemingly forever to get done.

A lot of the department’s challenges, Caldwell said, comes down to money. The Mississippi Department of Transportation (MDOT) budget is what Caldwell terms as “flat,” and has been that way for over a decade.

Caldwell said other budgets have gone up over that time, from the state budget to local municipal, law enforcement, and other such agencies. But the MDOT budget has remained the same and as what is called a “special fund agency,” the department can’t spend dollars it does not have.

Another restrictor for MDOT is that in many cases, salaries can’t compete with other agencies. Caldwell said MDOT recently lost four employees to Tate County, which could pay more than the transportation department could offer.

“We have 25 percent fewer employees with MDOT than compared to 10 years ago,” said Caldwell. “We’re restricted on how much we can pay because the State Personnel Board restricts us. It’s all restricted by the state.”

While $80 million in lottery funds annually goes to transportation, with rising costs, “we’ll be able to do less with that $80 million each year and it runs out in eight and a half years,” Caldwell said.

There is a potential for some federal funds to come in but it will amount to a “sliver” of the total dollar amount for transportation. Another pot of around $1 million in excess funding to the state would likely go one-third to health, one-third to education, and other departments “fighting over” the remaining amount.

In terms of the major road projects DeSoto County is most interested in, Caldwell said the state Highway 305 project is probably in preliminary discussions. I-55 has also been hung up for several years and Caldwell suspects the cost of that project will continue to go up.

“The I-55 project between Goodman and Church Roads, the pre-pandemic estimate was $105 million,” Caldwell said. “I’m guessing it’s probably going to now be about $160 million. That’s what is happening to our estimates. If the federal government doesn’t come up with new money and the state doesn’t come up with nearly anything new, don’t look for Highway 305, or even I-55. It’s just a matter of sheer numbers.”

Still, the Transportation Commissioner did not leave the luncheon without a glimmer of some hope. Caldwell believes there are some things that can be done with the funding that is available.

“$1.2 billion is flat and it’s ugly and it’s the same money that we had 11 years ago, but it’s not nothing,” Caldwell explained. “We have to see if we can get some pay raises. There’s some things we can do with the money that we have. We’re keeping our head above water as it is right now with the budget we have right now, but the slower the money comes in, the slower the process will be.”