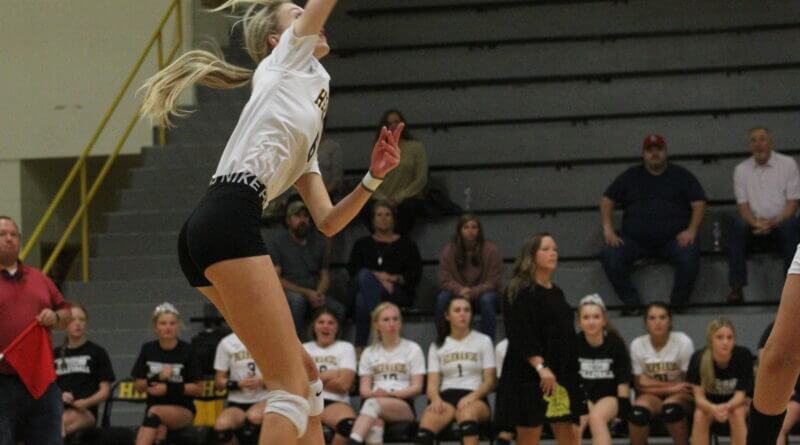 The Northpoint Christian School girls’ volleyball team finished its regular season Tuesday night with an impressive 3-1 victory over the Lady Tigers at Hernando. Set scores for the Lady Trojans were 25-20, 25-16, 21-25, 25-8.

It was a good way for coach Kim Robinson’s squad to enter the postseason as district champions and have a first-round bye. Northpoint will host its first playoff match on Monday.

But Tuesday night was about challenging a DeSoto County MHSAA 6A squad in Hernando, a team that also appears to be headed into the postseason.

In the first set, Hernando moved out to an 11-8 lead and had Northpoint call a timeout after the Lady Tigers had scored four of the previous five points leading up to the Lady Trojan stoppage.

A Hernando point off a block moved their set lead to 17-13, but the Lady Trojans started a comeback from there.

When a Hernando volley found the net, Northpoint tied the set at 19-19 and the visitors continued to score four more points. Brylee Faith Cherry’s two consecutive kills got Northpoint within one point of winning the set at 24-19 in front of the final 25-20 set win for the Lady Trojans.

Northpoint roared out strong in the second set, taking a 15-5 lead to force a Hernando timeout. The Lady Trojans scored six of the next 10 points to take a 21-10 lead, but that’s when coach Jayme Vinson’s Lady Tigers started a rally.

Hernando scored three of the next four points to get within 22-13 Northpoint, but when a volley was not returned by the Lady Tigers to make the set score 24-14, the Lady Trojans were able to put together the 25-16 set win.

A kill by Hassie Claire Thurman and a drop shot that found the Hernando floor by Sophie Bauer got the Lady Trojans within 19-18 Hernando and the Lady Tigers were able to hold on for the 25-21 set win.

That would be Hernando’s last point of the night, however, as Northpoint finished off the Lady Tigers 25-8 for the four-set victory

For Northpoint on the night, Sailor Cole had 23 digs and three aces. Hassie Clare Thurman 11 kills, 18 digs, one block and two aces.