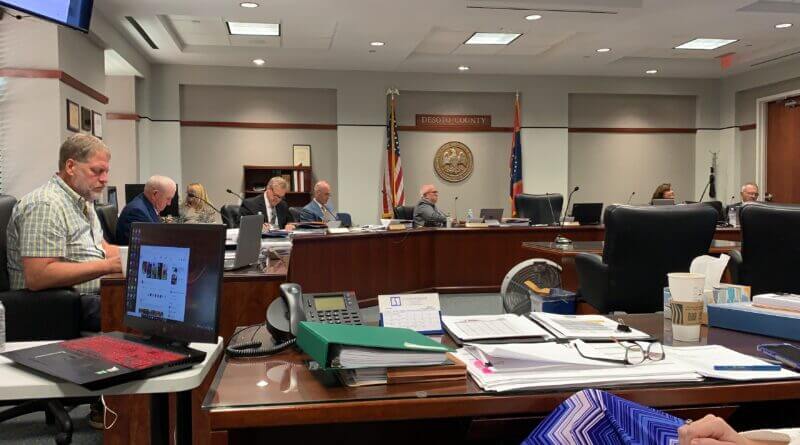 DeSoto County has a new budget to work with for the coming fiscal year, after the Board of Supervisors Tuesday, Sept. 7 set the millage and approved the budget proposal for the next 12 months, starting Oct. 1.

The bottom line for DeSoto County officials during Fiscal Year 2022 is about $325.84 million. Budgeted spending for the year, however, is about $216.18 million. Some of the difference comes from carryover money now used in the current fiscal year ending Sept. 30, and current multi-year projects that are ongoing, such as the improvements to Holly Springs Road.

The budget was voted on after supervisors set the millage rate for the next year at 41.02 mills. If you believe that’s a familiar figure from past years, you’d be correct. That millage number has been the same in DeSoto County for the past 18 years, officials said, dating back to Fiscal Year 2005.

The county’s portion of your property tax bill will also include an additional 52.85 mills for the DeSoto County School District, which the district’s Board of Education earlier approved. It also is the same as the current year and hasn’t moved much in recent history from the public school side, either.

A total of 4.11 mills will go to Northwest Mississippi Community College for a total county portion of the tax bill at 97.98 mills.

Individual cities and the Town of Walls set their own millage at their local government level to complete your property tax statement.

“I’m really excited about all we are able to accomplish without a tax increase,” said Supervisors Board President Mark Gardner on Tuesday. “Expenses of running the county grow each year so it costs more each year to run the county, but we’ve been able to maintain that because of our county’s growth,” now estimated at approximately 188,000 people.

County Administrator Vanessa Lynchard pointed to the many projects the county has been able to accomplish in the past few years, including Holly Springs Road, which she said would see about $17.45 million budgeted for Fiscal Year 2022 from all sources, she said.

The construction work on Holly Springs includes raising the road level about 10 feet and adding five bridges along the roadway that floods over and stops through traffic over a half-dozen times a year.

Extending Nail Road, the Nail Road-Polk Lane Extension and the Swinnea Road extension from Starlanding to Bankston also are attracting money in the next fiscal year.

The county administrator made some comparisons to the county’s budget of 10 years ago, when the value of a general mill was about $1.268 million. In this year’s budget, that general mill will be worth about $1.896 million, indicating how the county has been able to do more while keeping the millage rate the same.

An item in the budget that Supervisor Lee Caldwell is especially pleased about are plans for the construction of an Agricultural Education Center. It would be located west of U.S. Highway 51 on Star Landing Road.

“We have about 200 acres there,” Caldwell said. “It will be developed into a large agri-park, with walking trails, and a horse trail around it. We are going to move our Extension Office and Farm Services into that area.” The supervisor added that about 18 acres of the land is already pegged for the planned National Guard Armory that was set in motion a couple of years ago.

Caldwell said it is hoped the county’s 4-H program can grow through the project, which would also include ball fields and tennis courts.

She said the project should be let out for bids in January for the first phase of $11.7 million with a completion time frame of about two years.

FIGHT4DESOTO DONATION: Leaders of the Fight4DeSoto non-profit group that organized opposition to Olive Branch’s annexation bid Tuesday gave DeSoto County officials funds to help pay for a park in the Lewisburg area.  Jamie Ross of Fight4DeSoto said the check they are writing for the Lewisburg Community Park is $7,383.79.

“We wanted to earmark that and donate to the county for the park that’s going in on Craft Road across from Lewisburg schools,” Ross said.

Primarily from the Lewisburg area but also representing the entire county area Olive Branch sought to annex, Fight4DeSoto spent months raising funds for its legal fight against the city’s efforts, which would have added about 50 square miles to the city limits.

The court trial involved the City of Olive Branch, City of Hernando, and DeSoto County. The county was involved for residents in the unincorporated areas of Lewisburg, Bridgetown, Pleasant Hill, Cedar View, and Center Hill that were facing annexation by Olive Branch.

“There’s not enough I can say about how hard you guys worked and we were glad to help you,” Supervisor Michael Lee told Ross and others representing Fight4DeSoto. “This donation is going to be well spent and will help make that a nice little park there.”

With the annexation fight now finished, Fight4DeSoto is dissolving to avoid having to continue filing quarterly reports to maintain a non-profit status.