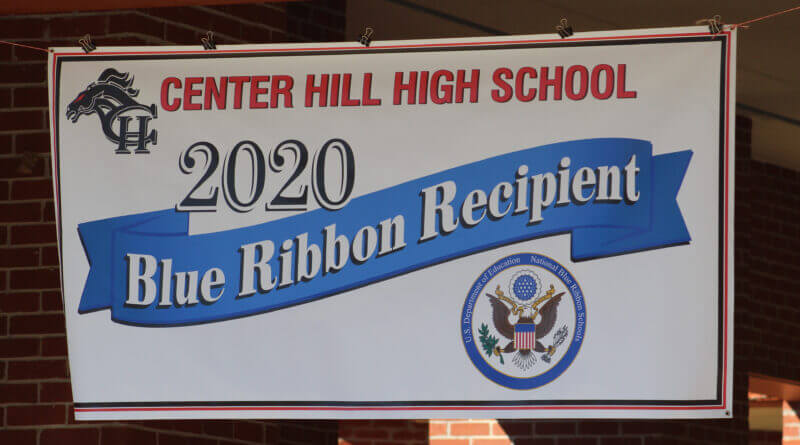 Center Hill High School welcomed Mississippi State Department of Education Supt. Dr. Carey Wright and other dignitaries to be part of a ceremony in front of the school building to get that recognition.  It was not the first time Wright had been in the Center Hill attendance zone for such an event, she said.

Being a National Blue Ribbon School is a major achievement in the educational world and it doesn’t come very easily.

The program began during the Reagan administration under then-Secretary of Education Terrel Bell. It was meant to bring public attention to the best schools in the United States and to facilitate communication and sharing of best practices within and among schools.

The U.S. Department of Education receives nominations for the award from each state education department and examines the nominations on specific criteria to make its selections. Only the top schools “make the grade,” so to speak. Forty-seven states take part in the program along with schools under the Department of Defense Education Activity. Those states that do not take part in the program are in Utah, Vermont, and Oregon. Puerto Rico, the Virgin Islands, and Bureau of Indian Affairs schools also do not participate.

Center Hill was recognized as an “Exemplary High Performing” school, meaning it has among the state’s highest high school graduation rates and has the highest achieving students in the top 15 percent in English and mathematics, measured by state assessments.

Center Hill principal Doug Payne looks to the dedication of his instructors for making the achievement found on “The Hill” possible.

“They sacrifice their needs and put the kids’ needs first and that shows,” Payne said. “It’s not about test scores. It’s about the whole child and what we can do. While they’re here, we try to teach them everything we can. We want them to leave here prepared for the workforce, prepared for a career or college.”

“Whenever I think of mottos for our schools I always think of Center Hill and ‘Respect the Hill,’” Uselton said. “It’s great to see Center Hill respected, not only statewide but nationally, as well. We’re so proud of our students, our teachers, faculty and staff at Center Hill for all that you’ve done to help with that.”

More on the National Blue Ribbon Schools Program is found on its official website.