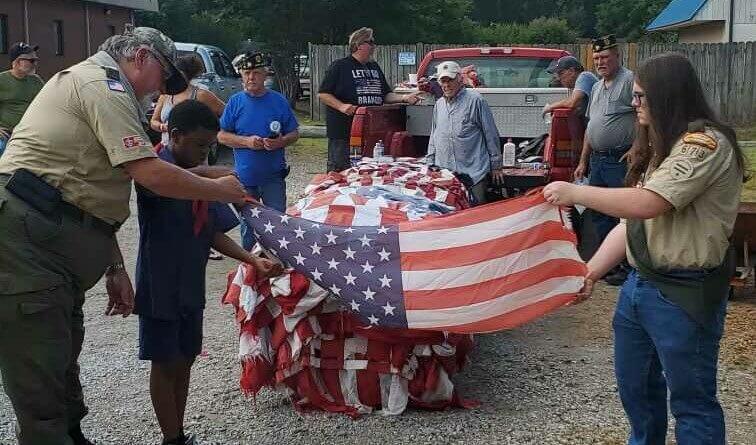 Photo: Unserviceable American flags are prepared to be honorably retired during a ceremony July 9 at American Legion Post 134 in Horn Lake. (Courtesy photo)

Members of the Hugh Dancy American Legion Post 134 in Horn Lake and Boy Scouts held a flag retirement ceremony on Saturday, July 9 for American flags worn down to the point of being unusable any more.

“The Ceremony for Disposal of Unserviceable Flags” is outlined in American Legion Resolution No. 440, passed by the 19th National Convention of The American Legion in New York, Sept. 20-23, 1937. The ceremony has been an integral part of American Legion ritual since that date.

Following is part of the wordage used in the retirement of the colors:

“Comrades, we have presented here these Flags of our Country which have been inspected and judged as unserviceable. They have reached their present state in a proper service of tribute, memory and love.

“A Flag may be a flimsy bit of printed gauze, or a beautiful banner  of finest silk. Its intrinsic value may be trifling or great; but its real value is beyond price, for it is a precious symbol of all that we and our comrades have worked for, lived for and died for-a free nation of men and women, true to the faith of the past, devoted to the ideals and practice of Justice, Freedom and Democracy.

“Let these faded Flags of our Country be retired and destroyed with the respectful and honorable rites and their places be taken by bright new Flags of the same size and kind, and let no grave of our soldier, a sailor or airman dead be unhonored and unmarked. Sergeant-at-Arms, assemble the Color Guard, escort the detail bearing the Flags and retire them by fire.

The American Legion is the world’s largest veterans service organization, striving to protect and expand benefits for our veterans and their families.