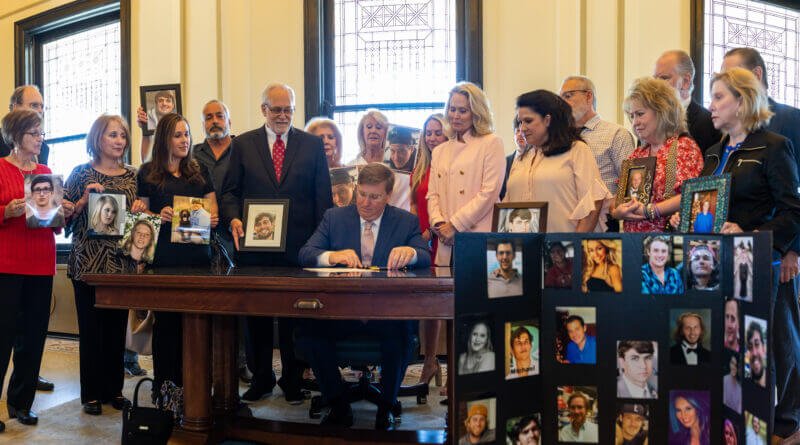 Gov. Tate Reeves Tuesday announced the signing of House Bill 607, known as Parker’s Law, legislation that enhances the penalty for any individual who knowingly sells or profits from the unlawful sale of fentanyl which results in the death of another person.

The legislation is a tribute to Parker Rodenbaugh, a Mississippi college student who tragically passed away due to a drug overdose in 2014.

Since her son’s tragic death, Parker’s mom, Cordie Rodenbaugh, has shared his story and helped to fight addiction and drug use, especially among students.

The law would punish those who attempt to benefit from selling fentanyl-laced drugs to people within their community and help to deter this distribution.

“Fentanyl has taken the lives of too many of our family members, friends, and neighbors. It has wreaked havoc and been an absolute tragedy for our communities,” said Reeves. “I want to thank Cordie Rodenbaugh for her tireless work in advocating for this law and fighting drug use among students. I want to give prosecutors every tool available to fight this epidemic and help to save lives. We’ll continue to do all that we can to fight fentanyl and other illegal drugs and those who distribute them.”

Over the course of the 12-month period ending in April 2021, over 100,000 Americans tragically died due to drug overdoses.