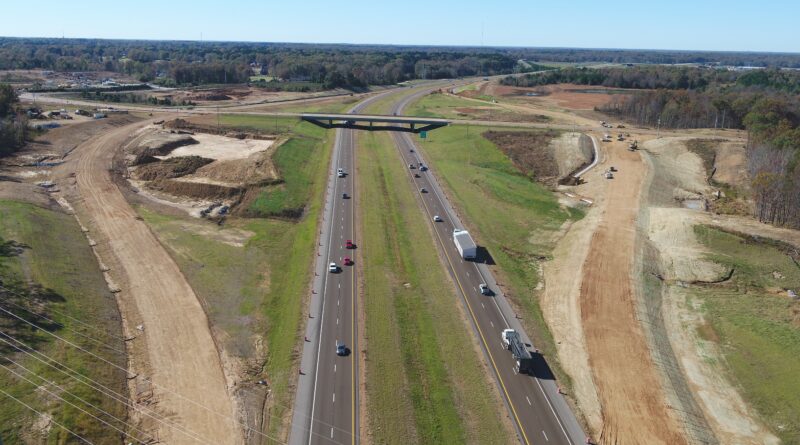 The project of most interest in the county is the McIngvale Road interchange project at I-269.

MDOT reports that crews continue to perform earthwork at the site in preparation of soil cement stabilization. Crews are also actively installing drainage structures and placing riprap throughout the project site.

The $7.9 million project was awarded to Tanner Construction Company, of Laurel, and is expected to be completed spring 2021.

In Tate County, a $52.5 million project to replace four bridges on I-55 at Hickahala Creek is underway.

The project includes construction of new northbound bridges over Hickahala Creek and Hickahala relief area. The bridges are being built on a new alignment.

Crews continue to perform earthwork along the new alignment. Crews have driven piles for the relief bridge and are constructing drill shafts at the Hickahala Creek bridge.

The project was awarded to W.G. Yates & Son Construction Company, of Jackson, and is expected to be completed in spring 2022.

Elsewhere in Tate County, two bridges on State Route 3 are being built on a new alignment.

The bridges will replace two existing steel girder bridges built in the 1950s over Arkabutla and Strayhorn creeks.

The $9.7 million project was awarded to Joe McGee Construction Company, of Lake, and is estimated to be completed in summer 2021.

In Marshall County, five bridges and one box culvert are being replaced at three sites on State Route 309.

At site one, three bridges have been constructed on a new alignment. The new approaches have been paved. Remaining work includes guardrail installation.

At sites two and three, traffic is using the new alignment. Crews are active at the sites removing the old highway and bridges.

The $17 million project was awarded to Talbot Brothers, of Nesbit, and is slated to be completed in fall 2021.

There is also a bridge replacement project in Grenada County over Jackson Creek on U.S. 51 underway. The $6.7 million project is expected to be done next summer.