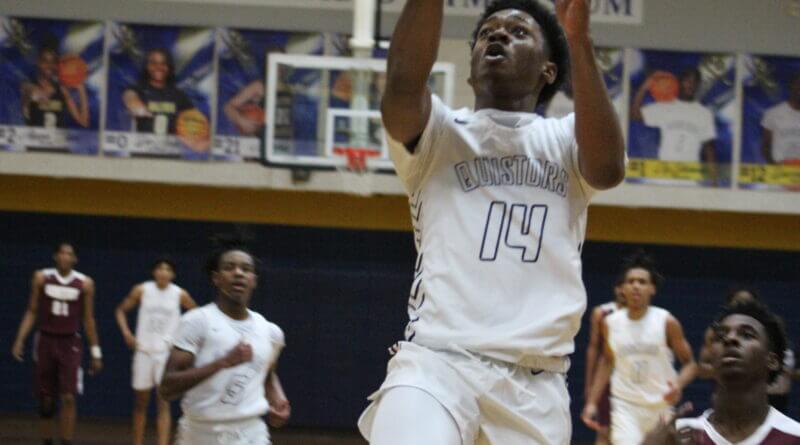 “Gentry is really good,” Rombaugh said. “They’re really, really good. I think they’re going to make a run at it (championship) this year. For us to get a couple of wins against them shows that we’re getting better.”

The Rams have lost only twice this season and both times the losses came at the hands of the Conquistadors, but neither time was easy. Tuesday night’s 74-67 victory at Charlie Bibbs Gymnasium in Olive Branch was another example of that.

“We play fast, that’s what we do,” Rombaugh said. “But they play fast too, so it was back-and-forth.”

What helped was that Olive Branch was able to jump out to a big lead early, taking a 23-12 lead after one quarter behind Landon Jeffries and Darren Davis, who each contributed seven points in the quarter.

The lead stayed at 11 through the second, as Olive Branch went to the locker room at intermission with a 41-30 bulge.

Terry Joyner came out of halftime and scored 12 of his team-high 19 points in the second half, six in each of the third and fourth quarters. Olive Branch held a 55-54 advantage after three quarters and Gentry actually took a brief lead in the final frame before a Conquistador run gave the home team a cushion for the rest of the contest.

“At the end of the day, the difference for us was that we had Terry Joyner and they didn’t,” Rombaugh said. “He did a great job rebounding and I don’t know how many blocks he had, but he had a bunch of blocks.”

But Gentry’s Chris Minton started to heat things up in the second half, hitting for 11 points in the third quarter and seven more in the final frame on his way to a game-high 31 points for the Rams.

Minton finished with seven treys, three two-point baskets and was perfect in four attempts at the free throw line.  Troy Griffin was next for Gentry in scoring with 12 points.

Jeffries and Davis each finished with 14 points for Olive Branch and Jaylyn Tyler added 10 more.

Rhema Pegues and Addison Howell again led the way for Olive Branch in the Lady Quistors’ 44-38 victory over the Lady Rams of Gentry (Indianola) Tuesday evening.

Pegues led the way with 18 points, nine in each half, and Howell added 11 more, with six of that total coming in the third quarter.  Taniyah Williams was the only Gentry player in double figures with 14.

Olive Branch took a 9-7 lead after one quarter and increased the margin to 22-13 at halftime behind Pegues’ six second-quarter points.

Howell tallied six of her 11 points in the third period and Pegues added five more as the Lady Quistors took a 38-28 lead going into the fourth quarter. Gentry outscored Olive Branch in the final eight minutes but came up short in the final result.

Hernando could never pull away from county rival Lake Cormorant, but did prevail in a Tuesday morning school-day encounter in Hernando, 58-55.

Abbey Harrison led everyone in scoring with 23 points, followed by Damyia Cummings with 18. Ja’Keria Hawkins finished with a game-high 30 points for the Lady Gators.

Lake Cormorant was held to only four points in the first quarter, as Hernando took a 12-4 lead after eight minutes.

Ten of Harrison’s 23 points came in the second quarter but Hawkins found the range before halftime with 14 points, including two three-pointers. The Lady Tigers held just a 30-28 edge at intermission.

Hawkins hit for seven more in the third quarter, but three Lady Tigers, Cummings, Harrison, and Kadreeda Robinson, each filled the basket for four points each and Hernando held the lead at four, 42-38, going into the final period.

Cummings’ nine points in the final eight minutes helped Hernando hold off the Lady Gators for the victory.