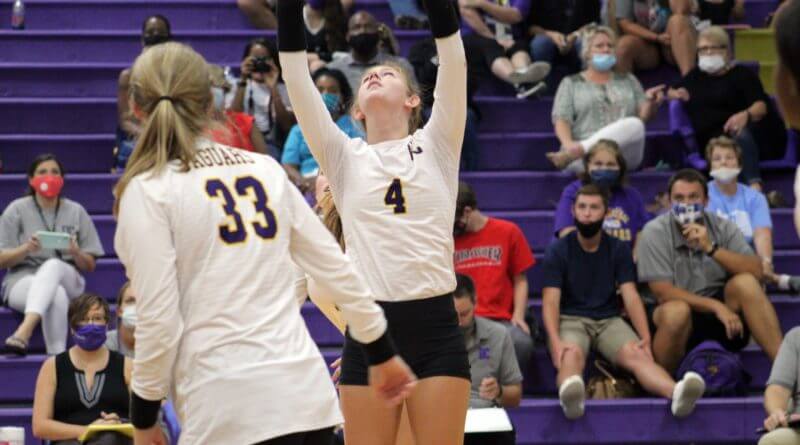 Two teams that typically are in the mix for state championships to end their season in the MHSAA state volleyball tournament started the 2020 year facing off against each other, on Monday night, Aug. 24.

Both teams were just happy to actually play a match, although the circumstances were unusual compared to previous seasons.

Fans were required to wear masks and socially distance in the bleachers. Players on the sidelines had their chairs were set apart in front of their coach.

Another new twist for the season was the addition of a ball sanitizer, an adult required to clean and sanitize any volleyball that left play and was touched by someone other than a player.  Five volleyballs were cleaned and set aside for use as another ball left the area.

DeSoto Central took set one 25-19 after fashioning a 16-10 lead before the Lady Gators called a time out.

In the second set, the Lady Jags had started a bit of a rally early and forged an 8-6 lead before Lake Cormorant stopped play with a timeout. DeSoto Central then scored nine of the next 10 points before the Lady Gators called another timeout.

However, DeSoto Central earned the next two points which forced Morgan to call another timeout, trailing 19-14.

“I think we had a lot of nerves for our first time out,” Morgan said afterward. “There were some little miscommunication things that once we get rolling, they’ll only get better at.”

Both coaches said the lack of the normal preparation routine left questions about how their charges would respond the first night of competitive high school volleyball.

“We lost our spring training that we typically have,” Morgan said. “In the summer we started later and we didn’t get to play our summer league. Tonight was the first time we played against another team. That’s tough.”

“It’s been a long preseason because we’ve just been able to play each other, we didn’t play summer league, so going into this week we really just had no idea what we were going to struggle with,” added DeSoto Central coach Margaret Falatko. “I was just really pleased with the effort and the adjustments they made mid-match, the ability to mix up the offense, our back row and our passing was phenomenal so that allowed us to do different things at the net.”

One other volleyball match in DeSoto County Monday night had Lewisburg sweep Olive Branch 3-0. It was the first victory under new Lewisburg Coach Amy Hendrichovsky, who replaced Allison Burchyett, now the first coach of the volleyball program at Northwest Mississippi Community College.

Hendrichovsky comes to Lewisburg from St. Benedict at Auburndale (SBA) in Cordova, Tennessee, where she spent one year as volleyball coach and was Dean of Students for the Catholic high school.

Before coming to SBA, Hendrichovsky was head coach of the program at the University of South Alabama for seven years.  She has also been an assistant coach for Middle Tennessee State and Metro State in Denver, Colorado.

A match that was supposed to be played Monday was Oxford against Horn Lake, however that match reportedly was canceled with the reason being that the Horn Lake team was dealing with a quarantine.  Another match later in the week involving Horn Lake and Oxford Lafayette has also been canceled.