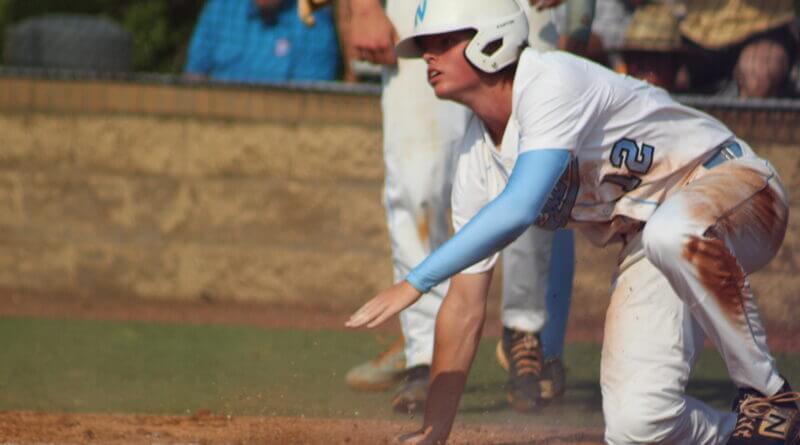 Photo: Connor McKnatt of Northpoint looks up after scoring a run in Tuesday’s contest against CPA. (Bob Bakken/DeSoto County Sports)

The game, part of the Association’s “Spring Fling,” where all the spring state championships are determined, will pit Northpoint against the loser of the Christan Academy of Knoxville vs. Tipton-Rosemark Academy contest played Tuesday evening.  If the Trojans win, they’ll play again at 5 p.m in another elimination bracket contest with the winner to enter the championship round.

Tuesday afternoon, Northpoint opened its first game of the tournament with a 7-5 loss to Christ Presbyterian Academy (CPA) of Nashville. The loss dropped the Trojans’ record to 32-8 and CPA improved to 29-14-1 with the victory.  It was the first state tournament appearance from Northpoint/SBEC since winning the state title in 2009.

“It was a tough one,” Northpoint coach Stephen Kirkpatrick said after the game.  “We just made too many mistakes. The desire to win and the competitiveness was there, but we worked from behind too much and they’re a good hitting team.”

The Lions did flash their bats with 10 hits for the contest, including two homers from catcher Cade Law. The Trojans answered with sic hits of their own.

Northpoint did answer late in the contest when Owen Staples buried a ball over the center field wall with a runner on to get the Trojans within 7-5 in their half of the seventh inning.

Law’s first homer opened the contest, part of a two-run first inning for a 2-0 lead for CPA.

The Trojans quickly answered with two runs of their own, coming on a two-run single by Jackson Thomason that scored Connor McKnatt and Hudson Brown.

The Lions retook the lead at 3-2 in the third inning when Drew Aiken stole home on a pickoff attempt at first.

But the Trojans would answer again in the top of the fourth when Jay Ferguson came home on a single by Robbie Hayes.

The Lions took control of the game in the bottom of the fifth when Law hit his second home run of the contest, a shot to center field that gave CPA a 4-3 lead, part of a two-run fifth for a 5-3 edge. The Lions scored twice more in the bottom of the sixth to fashion a 7-3 before the Trojans’ last at-bat and Staples’ home run before the end of the game.

Thomason and Staples led the Northpoint offense with two RBIs each.

Kirkpatrick said his pitchers didn’t get all of the support they needed.

“We just couldn’t make a few plays behind them and that cost us,” Kirkpatrick said.

“We’re going to talk a little bit and then put this one behind us,” Kirkpatrick said. “We’ve had our backs against the wall before, but we’ll play hard and I think we will.”

Northpoint state tournament baseball coverage are sponsored by the following: