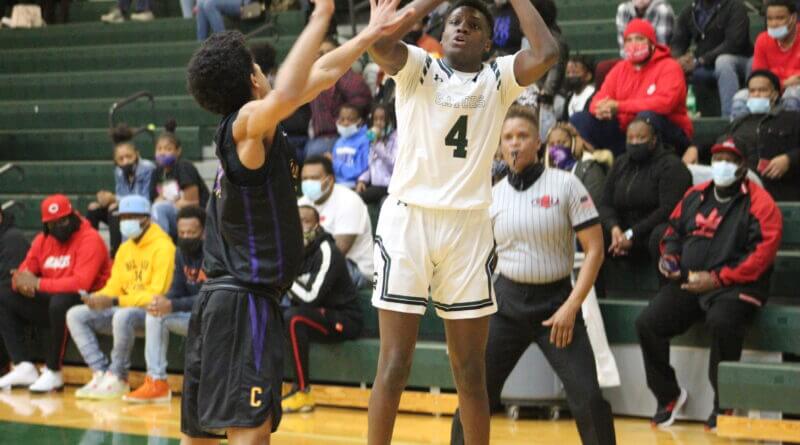 In tournament or playoff action, having a top seed is what teams strive for as the seeding is made to give the top seed a perceived easy route through the brackets. In the state high school basketball playoffs it also means a first round bye and a night off from playing while the other teams beat up on each other.

Throw in a snowstorm keeping games from being played at all and for Region 1-5A champion Lake Cormorant it meant a longer break from playing games and coach Bryant Worsham believed his team showed rust and the effects of the layoff in their play Thursday against Columbus, a 54-47 victory.

Bryant called it a good win, but….

“The 13-day layoff was tough but my guys came out resilient,” Worsham said. “They had a tough first half. Our legs looked like we were running in sand but then we started figuring it out. We came away with a win tonight. That’s all that matters, survive and advance.”

Lake Cormorant went out to a 19-13 lead in the first quarter and then put the clamps on with a defense that held the Falcons to just nine points heading into the halftime break as the Gators went to the locker room with a 33-22 lead.

The first-half lead became important in the second half, as Columbus outscored Lake Cormorant 25-21 after halftime. However, the final score includes a late run the Falcons fashioned in the final minutes to cut the lead from a 52-38 advantage the Gators had late in the contest.

Donovan Sanders was the pacesetter for the Gators, scoring 21 points for the game, 14 of which came in the first half and 10 in the second quarter alone.

Sanders got support from Keithean “KB” Brooks, who scored 14 points, which included a pair of three-pointers in the opening eight minutes.

Wille Young powered the Columbus offense with 20 points, 13 of which were scored in the second half.  Tre Dismuke added 12 points in the Falcons’ effort.

Lake Cormorant now faces defending state champion Callaway Saturday night in the state quarterfinals with the winner punching a ticket to the semifinals at Mississippi Coliseum.

“Callaway is the best team in the state 1A through 6A,” said Worsham. “It’s going to be a tough matchup but we’re at home and we’re one win away from Jackson so we’re going to be fired up. There’s only great basketball teams left so every night you’ve got to show up.”

QUISTORS OUST SOUTHAVEN: The Olive Branch boys rallied in the second half and eliminated Southaven from the MHSAA 6A state playoffs with a 64-61 victory Thursday night.  The Chargers held a 31-23 lead at halftime, but the Conquistadors put together a strong second half with 20 points in the third quarter and 21 more in the final eight minutes.

Southaven couldn’t solve Landon Jeffries in the second half, as he scored all 14 of his points after halftime to lead Olive Branch offensively.  Jonathan Burns and Terry Joyner each scored 13 and Jaylyn Tyler scored a pair of three-pointers to finish with 12 points for Olive Branch.

B.J. Morgan led Southaven with 16 points in the loss.

Olive Branch now travels to Starkville in the quarterfinals Saturday night looking to return as a 6A school to Mississippi Coliseum and the state semifinals. The Yellowjackets ousted Madison Central 64-37 Thursday night to advance to Saturday’s contest.

KAEDEN’S LAW LEADS MUSTANGS: A couple of nights after struggling with foul trouble against Provine, Center Hill forward Kaeden Laws led the way for the Mustangs to move ahead in the MHSAA 5A playoffs with a 69-65 victory at New Hope (Columbus).

Laws paced the Mustangs with 25 points in the second round victory which puts last year’s state runner up in the Elite Eight for the third straight year.

Zandon Haralson, who scored 31 in the first-round 67-52 victory over Provine Tuesday night, finished with 19 points.

The Mustangs led 34-28 at halftime but Center Hill was tied with the Trojans with five minutes remaining.

Center Hill now travels to Holmes County Central Saturday evening for a 5A quarterfinal contest as the Mustangs look to return to the state semifinals in Jackson.

CLINTON ENDS HERNANDO SEASON: On the road at Clinton Thursday night, the Hernando Tigers season came to an end as the Arrows posted a convincing 73-49 victory.  The Tigers’ year ends with an 11-17 record while Clinton improved to 18-1.  Clinton travels to Tupelo next on Saturday in the quarterfinals.