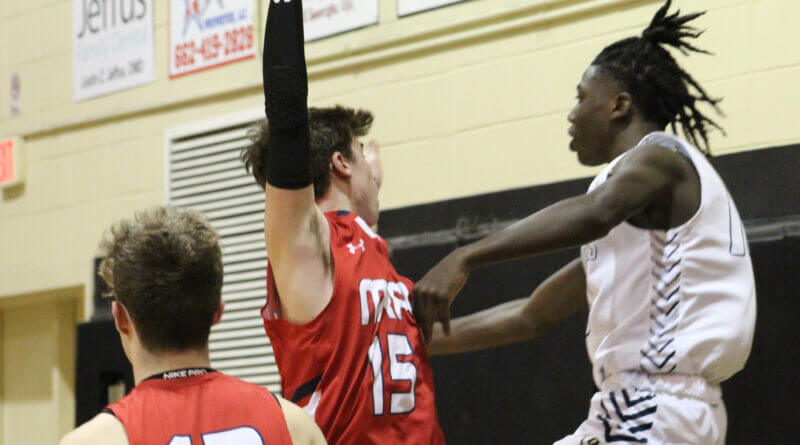 In six years, the Tangle on the Trail basketball event at Pontotoc High School has earned a reputation in attracting some of the better high school squads in the state. This year’s event even attracted an appearance from a Tennessee team from Dyersburg.

It’s actually two classics, one for girls and one for boys basketball rosters. The girls’ event was held before the Christmas break and on Saturday the boys took the floor.

The Conquistadors had originally been matched with Terry, but the Bulldogs couldn’t make it, so Madison Ridgeland Academy (MRA) came in to replace Terry on the schedule.

The Patriots brought an impressive 20-2 record to the Tangle and showed why they had the illustrious record after beating the Conquistadors 69-53.

For Olive Branch, it was a frustrating afternoon of missed chances, shots, and free throws, said coach Eric Rombaugh.

“Our defense wasn’t bad, but we just really couldn’t get it going offensively,” Rombaugh said. “That’s happened to us a couple of times this year where we couldn’t get into a rhythm and we paid the price for it.”

MRA took the early lead with a rally in the first quarter for a 15-10 edge after one quarter, then broke the game open with a 21-point second quarter for a 36-23 lead at halftime.

The Patriots kept the pressure on in the third quarter for a 57-37 edge heading into the final frame. Olive Branch outscored MRA 16-12 in the final eight minutes but it was far from what was needed for a miraculous comeback, as the Patriots picked up its 21st win of the year.

Olive Branch was led by Zahir Gutierrez with 15, followed by Jaylyn Tyler with 12 and Landon Jeffries with 10.

“We’re missing a couple of guys with injuries and COVID-19, so it’s ‘next man up,’” Rombaugh said. “Gutierrez gave us some good minutes tonight and some good minutes for us last night. Hopefully this gives him a little confidence the rest of the way.”

Josh Hubbard was the leading scorer for MRA with 25 points, followed by Harrison Alexander with 22.

The Olive Branch coach hoped his squad took something away from the result, if not a victory.

Taking the floor immediately after the Olive Branch game was the other DeSoto County squad playing in the “Tangle,” Center Hill. The Mustangs were paired with Holmes County Central, the team that sidelined Center Hill from the MHSAA 5A playoffs third round last year, 70-51.

The Jaguars won the rematch in Pontotoc Saturday by a 59-43 score.

As in the Olive Branch contest, Center Hill started with the lead, but Holmes Central recovered for a 13-10 advantage at the first quarter’s end. Deshun Dunn paced the Mustangs’ first period offense with five points.

From there, the Jaguars held the Mustangs to only eight points in the second quarter for a 24-18 halftime lead. Dunn and Jarvis Barber split the points for Center Hill, each getting a pair of baskets before intermission.

Holmes Central pushed the advantage a couple more points in the third quarter for a 38-30 edge going into the final eight minutes, where the Jaguars finished the game with a 21-13 edge for the victory.

Jhamal Ross carried the offense in the third quarter with three field goals for six points and in the fourth quarter, it was Dunn again with a basket and four free throws to pace the Mustangs.

It’s been a tough schedule of late for Center Hill and first-year coach Daniel Forbes. The Mustangs had to withdraw from the NXT LVL Hoopfest in Nashville, Tenn. over the Christmas break due to COVID-19 protocols and both Olive Branch and Center Hill battled hard in their first district encounter on Friday night, a game won by the Quistors 64-52.

Both are hoping this “trail” will be friendlier than the one they were on in Pontotoc on Saturday.