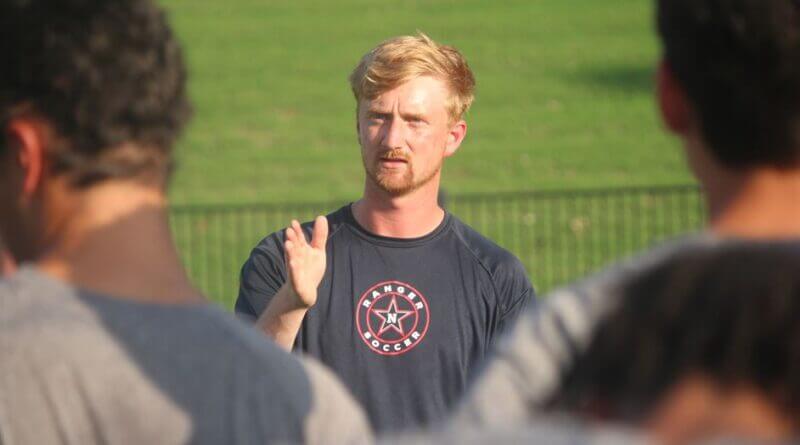 Photo: First year head coach Michael Sullivan will have the chance to capture his first official victory on Thursday in the Rangers’ season-opener at Blue Mountain College. (Brian Lentz/NWCCRangers.com)

It has been less than a month since Michael Sullivan was formally announced as the new head coach of the Northwest men’s soccer program.

Less than two weeks later, Sullivan got his first look at his squad and quickly turned around with an exhibition match at Christian Brothers University last Wednesday. Just days after that, the Rangers traveled to Mississippi College for another exhibition as well.

To say Sullivan has been a busy man in his first month on the job would certainly be an understatement.

“The preseason was an interesting time,” Sullivan said. “It was mostly due to the fact that the guys that have been here are not quite used to the style of play that I want to implement, so it has taken time for those guys to get used to me and vice versa. On the other side of the coin, the new ones coming in are not used to me and would not have been used to the previous coach either. So you have to get the whole team used to you and your style, instead of just the newcomers. That is something that just takes time.”

Northwest is coming off a 4-11-1 season, but all four wins came against MACCC North Division opponents, thus helping the Rangers into third place and the program’s first playoff berth since 2016. Despite the change in command, Northwest does bring back nine players from last season’s squad, including All-MACCC selections Luis Cosme and Jesus Villegas and returning starters Koby Rhone, Dereck Gomez, Sidney Black and Braylon Kettler.

Although the Rangers boast some experienced returners, Sullivan’s squad is looking to improve in every area ahead of Thursday’s regular season opener at Blue Mountain College. The area with the most depth will be the midfield, according to Sullivan.

“That’s really our overloaded area of the team,” Sullivan said. “That is the area where we have quite a few players that can have significant roles there. Because of that, we have the ability to decide if we want three, four or five. With this team and their multitude of skills, that really allows for the change in formation. I am looking forward to being able to manipulate that group of players in order to meet the needs to go up against the team that we’re playing.”

Up front, the Rangers are young but have plenty of speed and skill, according to Sullivan.

“I can say that there is a bit of finishing ability there and I am excited to work with that,” Sullivan said. “We are coming together and fine-tuning the style of play that I want out of the attackers. Some are picking it up quicker than others, but collectively I think it’s coming together and we should have some success there.”

Defensively, Sullivan has some size and experience to look forward to on his back line.

“They are going to be our rough and tough group,” Sullivan said. “They are a hungry group for some one-on-one battles and they’re starting to get the picture of being able to be offensive weapons as well. I don’t necessarily want my defenders to kick the ball up the field once they get it; I want them to be able to attack once we regain position. I am excited to see them develop into other roles on top of what they will already do on defense.”

Perhaps the most wide-open area of the team lies in between the posts. As the summer began, the Rangers had no goalkeepers on the roster but were able to pick up two. Now, Sullivan says he has up to five players working as goalkeepers, including some that are playing dual roles.

“Some people are stepping into the role and they see that we need some help there, in terms of numbers,” Sullivan said. “We have five coming to goalkeeper training and there are some that are surprising me, which is good to see. It’s a competitive list and I think that is great for our culture. I think it’s something that will come down to who is having the better week, as opposed to who is having the better season. So that is important to understand and helps us keep our guys on our toes.”

As for the schedule ahead, the Rangers will face off against a slew of four-year programs in non-conference play. After the opener at Blue Mountain, Sullivan’s group will pay visits to Belhaven and MUW, before hosting Bethel University in the program’s home-opener on September 12. After that, the Rangers will go into full conference mode, facing the likes of nationally-ranked Jones College and East Central, before hosting No. 5 Pearl River on September 23.

It’s a new look to the schedule for the Rangers, after the MACCC voted to abolish the North and South divisions and instead open up the whole conference to the regular season slate.

“With us playing four-year schools as a two-year program, that presents a challenge for us,” Sullivan said, regarding his non-conference schedule. “I think that gives us an opportunity to see how those programs with older rosters handle certain situations. If we get a goal on them, how do they respond? Do they put their heads down and sulk up, or do they just keep coming? I think that is an important lesson for us to learn and take with us into our conference against some teams that may not have had that experience like we did. If we go down by a goal or two, I think those early-season games will help us prepare and know how to respond.”

Overall, it is important to remember that this is a growing year for Sullivan and his roster. However, this season can mark the foundation of a new mindset, something that could carry over for years to come.

“One of the biggest goals I want to see is a development of a team culture that revolves around our core values,” Sullivan said. “By developing that culture, I believe that people will be able to see physical results on the field. Everyone has to be on the same wavelength to even start to grasp what we are trying to do. It is important to understand that we lift each other up when we face adversity, and we have to make sure that we know how to handle a problem when it presents itself.”

After Thursday’s opener, the Rangers will have to wait until Monday, September 12 to play in front of the home crowd. All home matches will be carried live in HD on Ranger TV. Visit nwccrangers.com for the complete season schedule.