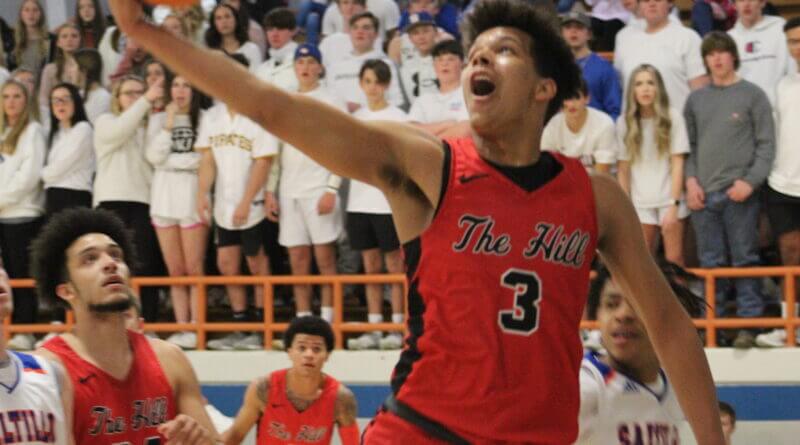 CENTER HILL BOYS 76, SALTILLO 55: The smile of satisfaction on the face of Center Hill basketball coach Newton Mealer may have had a secondary meaning after Friday’s blistering of district rival Saltillo 76-55 on the Tigers’ home floor called “The Den.”

The gymnasium, with its almost balcony-like bleachers and raucous student section, has the feel of a hostile road gym that the Hickory High team had to play at in the famous basketball movie “Hoosiers.”

“It’s a home court advantage (for Saltillo),” Mealer said. “I tell our kids they’re 15 points down when you start the game here.”

Mealer left the Saltillo bandbox Friday night satisfied with his team’s 11th straight victory, but also safe in the knowledge that as Center Hill moves to Class 6A next season, his Mustangs won’t have to darken the doors of the place anymore.

There was still motivation for Center Hill to leave with a win and that was to keep a streak going as the Mustangs enter the district tournament at Lake Cormorant.

“We haven’t lost a district game in two years,” Mealer said. “We wanted to finish this out with a good showing tonight.”

He and his Mustangs left with a convincing victory that saw Center Hill never threatened in the game.

The Mustangs quickly jumped on the outgunned home squad with a 23-point first quarter for a 23-9 lead after eight minutes. Center Hill made it 38-21 at halftime and outscored the Tigers 21-17 in the third quarter for a 59-34 edge going into the final quarter.

That’s where Saltillo tried to make a comeback with a 21-point fourth period, but the game was too far gone at that point.

Tanner Burcham got the Mustangs galloping in the first half with 13 points, 10 of which came in the opening quarter.

“We’ve got too many shooters on this team,” Mealer said. “If you try to take (Kaeden) Laws and Zandon (Haralson) out, which they weren’t able to do, it still left guys wide open who were on the floor to make shots.”

Laws kept his hot shooting going in the second half, hitting four three-point shots in the third quarter and finished with a game-high 23 points.

Burcham ended his night with 21 points for the Mustangs and Zandon Haralson scored 18 more, 11 of which for Haralsoon came after halftime.

“When we shoot the ball like we’ve been shooting the last five games, we’re a hard, hard team to beat,” said Mealer.

Mealer revealed Friday night that he had added one more opponent for the final week of the regular season. Olive Branch will come to the Center Hill gymnasium Tuesday night to renew a rivalry that was not expected to continue this season. Friday, the Mustangs’ regular season ends with a contest against Southaven.

SALTILLO GIRLS 45, CENTER HILL 35: The Center Hill girls dropped to 3-3 in 5A division play with Friday night’s 45-35 loss to Saltillo. The Lady Mustangs struggled against the Lady Tigers, falling behind 15-9 in the first quarter. Center Hill was held to seven points in a second quarter that grew the Saltillo advantage to 26-16 at intermission.

Both teams traded points in the second half, but Saltillo held off Center Hill for the 10-point victory.

“Rankins is a ninth-grader and she can play some basketball,” Owens said. “We’re working on her mental toughness. Once she conquers that part of the game, she’ll be pretty much unstoppable.”

Hope Mealer, usually Center Hill’s long range scoring threat, was held to just four points, on a basket and two free throws, all of which came in the fourth quarter, as the Saltillo defense seemed to make a special effort to keep Mealer from raining threes from outside the arc.

Janiah Hinton’s 14 points led Saltillo in scoring for the contest.

“We worked a lot this week on rebounding, boxing out, crashing the boards, and we really didn’t stick to that game plan which hurt us,” Owens said. “We’ll have a down day tonight, but hopefully for the tournament we’ll fix that problem.”

The Center Hill soccer Mustangs blistered Grenada 7-0 in a second round Class 5A playoff soccer match Friday night. Center Hill roared out to a 5-0 halftime lead and scored two more goals in the second half to end the game on the mercy rule. Center Hill now awaits the winner of Saturday’s Saltillo-New Hope match for the North Half Championship on Tuesday at a site not yet determined.

Olive Branch was the boys’ champion and Oxford had the top girls result in the regional Class 3 bowling meet at Strike Zone Lanes in Southaven Friday.

The top three teams in the boys’ meet were Olive Branch with a team score of 2,802, followed by DeSoto Central in second at 2,749 and Lewisburg in third place with a score of 2,718.

Jaden Craigen of Lewisburg had the high series for boys at 638. Genevieve Bowker of Tupelo was girls’ high series at 504.