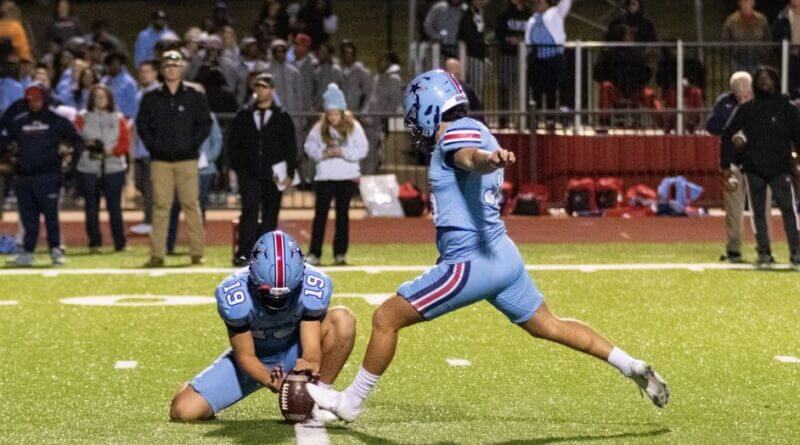 Facing off against one of the nation’s toughest defenses, No. 2 Northwest was held to a season-low three first half points in Sunday evening’s 33-12 NJCAA Semifinal loss to third-ranked Iowa Western.

Northwest was held to season-low 26 rushing yards in the first half, as the Reivers took the Rangers’ rushing attack out of the game entirely. On the flip side, Iowa Western moved the ball well on the first two possessions of the first quarter, both resulting in points after clock-burning drives.

Iowa Western’s first possession of the game lasted nearly six minutes and was capped off by a 19-yard field goal from Sam Wilber. After the Rangers’ first possession was halted by a holding penalty, Northwest was forced to punt, later leading to another 12-play drive over a five minute span that ended with a 35-yard touchdown pass from James Graham to L.J. Fitzpatrick on fourth down.

Trailing 9-0, the Rangers moved the ball to midfield entering the second quarter and worked their way down to the Reivers’ 35-yard line. However, the possession ended in no points for Northwest after a failed fourth down attempt, allowing Iowa Western to hang on to the shutout a little longer.

It would only take seven plays for the Reivers to further widen the gap, with Graham completing a short touchdown pass to C.J. Horton from three yards out. It was the second touchdown for Iowa Western, pushing the deficit to a 16-0 margin with 9:10 remaining in the first half.

Northwest finally began to find some momentum on the ensuing possession, with Ren Hefley completing a 10-yard pass to Jaycob Horn and a deep 59-yard target to D.T. Sheffield. However, the Rangers were unable to reach the end zone, settling instead for a 25-yard Eli Hamlin field goal with 6:24 to go.

Defensively, the Rangers were finally able to contain the Reivers’ offense, stopping Iowa Western near midfield late in the second quarter. Northwest then took over from its own 12-yard line, but were unable to move the ball, giving the Reivers a short field that resulted in a 22-yard field goal and a 19-3 lead to end the first half.

Northwest was limited to just 113 yards of total offense in the first half, including -6 rushing yards. It also marked the first time the Rangers didn’t score a first half touchdown since a loss at Jones College on September 9, 2021.

Both teams would trade possessions to open the third quarter, with neither team able to score at first. However, Northwest found some momentum on its second drive of the second half, as Hefley connected with Jaycob Horn on back-to-back completions for 13 and 53 yards, bringing the Rangers into the red zone for just the second time all night.

Facing first and goal from the 2-yard line, Hefley got his team into the end zone, keeping it himself for the short score and his sixth rushing touchdown of the season. The Rangers chose to attempt a two-point conversion, but were denied, keeping the score at 19-9 midway through the third quarter.

Defense continued to be the story for both teams for the remainder of the quarter, as Northwest and Iowa Western traded punts back and forth. Though the Rangers were possibly beginning to feel the tide turn late in the third quarter, Iowa Western effectively ended any chance of a comeback, as Will Lee picked off Hefley’s pass and returned it 40 yards the other way for the Reivers’ first score of the second half.

Trailing 26-9 entering the fourth quarter, the Rangers were able to slowly move the ball downfield on a 13-play, 57-yard drive. However, Northwest was kept out of the end zone and forced to settle for another Hamlin field goal from 34 yards out, closing the gap a little to 26-12.

After both teams traded punts once more, Iowa Western delivered the ultimate dagger on a 9-play, 24-yard drive that would burn nearly six minutes off the clock. The Reivers scored on third and goal from the 1-yard line, pushing the Reivers’ lead to its final 33-12 advantage.

Northwest was outgained 335-262 in total offense, with a majority of the Rangers’ yards coming through the air (236). Iowa Western accrued 182 of its total yardage on the ground, led by 87 yards from Graham and 74 from Bryant Williams. Fitzpatrick finished as the Reivers’ leading receiver, with 98 yards and a touchdown on three receptions.

Hefley finished 20-of-35 through the air with 236 passing yards, giving him 2,476 to end his Ranger career. The Little Rock native also enters the Northwest record books with 209 completions, fifth most in a single season, and his 60.9 completion percentage puts him fourth all-time in the career rankings and fifth in a single-season, overtaking Gardner Minshew in both categories.

Defensively, the Rangers were paced by yet another solid outing from linebacker Sam Brumfield, who finished with 13 tackles for his ninth double-digit tackling game of his career. The Pearl native concludes his Northwest tenure with 218 total tackles, second-most all-time behind Mike McClenton’s 241 career total (1988-89).

With the loss, Northwest closes the book on another strong season, finishing with a 10-2 overall record. The 2022 season marks the program’s first 10-win campaign since 2015, when the Rangers completed an 11-1 overall record and won the NJCAA National Championship.

Since Benjy Parker took over the head coaching reigns in 2016, the Rangers have compiled a 58-16 overall record and a .784 winning percentage. Parker has further cemented his spot as the Rangers’ second winningest coach, trailing only Bobby Franklin’s 201 victories that were collected over a span from 1981-2004.

In that timeframe, Northwest has made the MACCC Playoffs every year and has played in the conference title game every season except 2018. The Rangers have also competed in the NJCAA Division I Playoffs, the National Community College Football Championship or an NJCAA bowl game in five of Parker’s seven seasons.