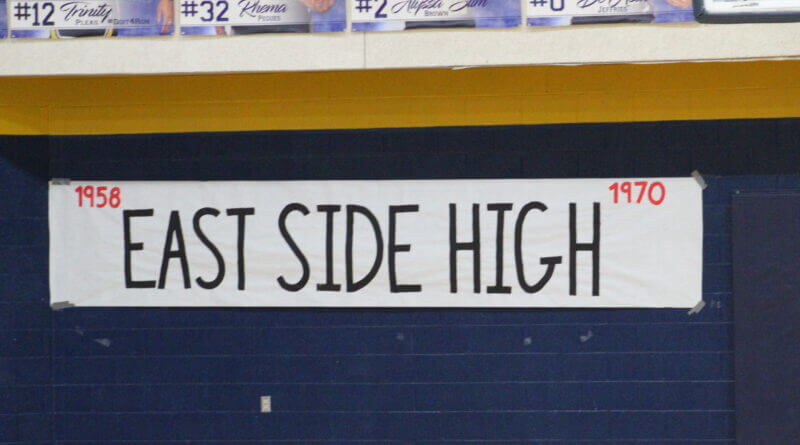 The Olive Branch boys basketball team defeated Pontotoc in a high-scoring affair 91-83 Saturday afternoon, while the Olive Branch girls suffered a stinging 60-56 loss to the Lady Warriors, one of the top teams in MHSAA 4A.

While they were Olive Branch Saturday, the teams were introduced as the East Side High Dragons and wore East Side uniforms in respect to the old African-American high school which is now Olive Branch Intermediate School. Saturday’s game was supposed to have been played Thursday, but was postponed due to the week’s ice storm.  Many East Side alums came to watch, wearing their black and gold to celebrate the school with the event, expected to become an annual game at Olive Branch.

“It was amazing that we brought back this tradition just to have East Side High,” said KJ Wright, the Super Bowl-winning linebacker who graduated from Olive Branch. “ My grandparents went to East Side and just to get the elderly back together, have them reunite and let the young people know what came before them was pretty cool to see.” Wright was among those who attended the game inside Charlie Bibbs Gymnasium.

On the final day of the regular season, with region tournaments looming next week, the Conquistadors fought off a Pontotoc Warriors that at 15-11 is still the top team in Region 2-4A, said Olive Branch coach Eric Rombaugh.

In a high scoring first half, Olive Branch took a 26-20 lead, but Pontotoc cut the margin to 44-40 at halftime. The Quistors broke out to a 65-55 lead in the third quarter.

Jaylyn Tyler scored 11 of 19 points in the first quarter for the Quistors and Reece Garrison led the offensive charge in the second quarter, scoring all six of his points in the quarter before halftime.

Landon Jeffries took over for Olive Branch in the second half and couldn’t be stopped, scoring 21 of his game-high 26 points after intermission, 14 of which came in the fourth quarter of play.

“Landon was really pushing the ball for us and made some good decisions to the rim,” Rombaugh said.

Pontotoc was led by two players, as Jaylen Edwards and Tyler Shephard each finished with a game-high 29 points, but the Warriors could get little after that.

“I think the only difference in the game is that we got a couple of stops there towards the end and we were able to make a couple of free throws and a couple of layups to kind of put it away,” Rombaugh said. “This was one of those games where we kind of pulled away and they came back.”

The precursor to the boys’ game was the girls’ battle between Olive Branch and Pontotoc, both ranked among the top five in their respective classes. Pontotoc is ranked second in Class 4A and Olive Branch, which enters the postseason next week with three straight state championships, is seventh in Class 6A.

The Warriors took a 14-12 lead after one quarter and pulled away for a 32-25 advantage at halftime. A three-point barrage by the Lady Quistors in the third quarter got Olive Branch within 42-41 after three quarters but Pontotoc won the fourth quarter by an 18-15 margin for the four-point victory.

Addison Howell was the main offensive threat for Olive Branch Saturday afternoon, scoring a team-high 20 points. Trinity Pleas triggered the three-point third-quarter attack with 11 points in th quarter, nine of which came from beyond the arc. She finished with 13 points for the game.

Samya Brooks was Pontotoc’s leading scorer with a game-high 21 points before she fouled out with 1:23 remaining in the contest.

Thursday was the originally scheduled day for the games and the reunion gathering of East Side alums, an activity that was still held on Friday.

“It’s important that we do remember who came before us,” said KJ Wright. “It was such a great tradition before segregation was here and then they integrated. There’s a lot of history behind this.”