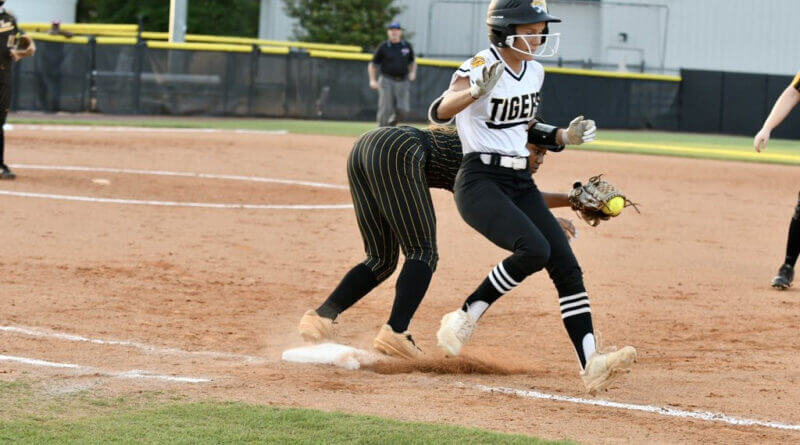 The Lady Tigers picked up a run one victory in game one of their best of three series against Oak Grove.

The end result? Hernando is one win away from their one main goal this season: to be considered the number one team in 6A softball.

‘Nando took care of business at Southern Miss in the final game of the day in the state softball playoffs, taking out Oak Grove 2-1. The Lady Tigers picked up the final out of the night as Emme Muizers grabbed a slow roller hit to her at first base and tagged the runner out with the bases loaded.

“I thought we fought hard until the end, which is what you expect in a state championship series game. We had a few mental errors towards the end, but we had confidence in our pitching and defense to get us out of it,” Hernando head coach Nicki Whitten said of her teams edge of your seat victory.

The Lady Tigers got on the board in the first inning after Rylee Eyster worked a base on balls and was moved over on a pair of fielders choice outs. Eyster then sprinted home for a 1-0 lead on a wild pitch.

“One of the things we have relied on all season is speed. That is a lot of what we do,” Whitten said of her team scratching out an early run.

Hernando got their second score of the game after Jaclyn Carter doubled in the 3rd inning and was advanced over on a sac fly before Muizers drove her in on a single up the middle.

From there, Hernando pitcher Julia Shaw would cruise along, carrying a one-hitter into the 6th inning. She ended up tossing a 4 hit complete game, striking out three and not allowing a run until the 7th inning when the Lady Warriors fought their way back into the game.

“I was satisfied with our pitching. Shaw got us a lot of pop outs and ground balls, which she has done all season. I think she kept Oak Grove off balance,” Whitten said of her teams pitching performance.

Oak Grove made things interesting late, getting a Alexis Papp single to score Amulina Rumell and then loading the bases before Shaw got a pop out to catcher Ally Callahan and the grounder to end the game.

Hernando now looks to close the series out tomorrow as the visiting team on the scoreboard. Game time is scheduled for 30 minutes after the end of the second game of the day.