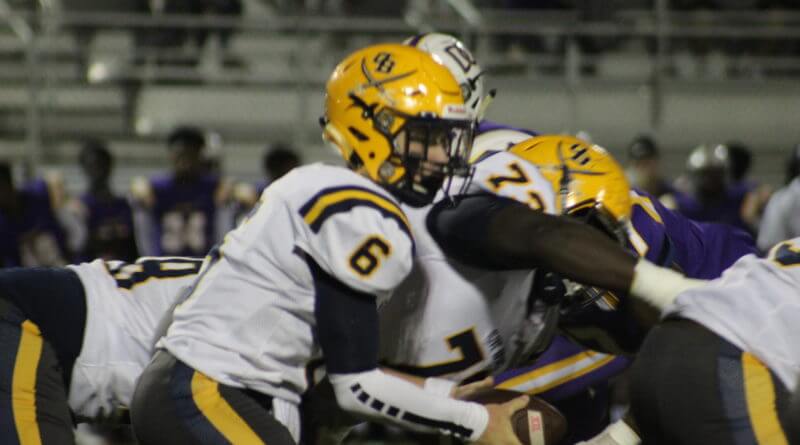 It took a seven-yard touchdown with 41 seconds left in the game to decide Friday’s battle with Olive Branch at DeSoto Central, as the visiting Conquistadors remained undefeated at 4-0 for the season. DeSoto Central, with the heartbreaking loss, dropped to 2-2 overall and 0-1 in region action.

The Conquistadors, with coach Darren Bowling in his first season at the helm, opened the scoring with a 21-yard scoring run on the opening drive by quarterback Ty Walton at the 10:16 mark of the opening quarter for a 7-0 lead.

The Jaguars, led by coach Shelby Ford, answered later in the quarter, with a 15-yard pass play from quarterback Jason Curry to Richard Coleman with 5:58 left in the quarter, but failed on the extra-point kick attempt to trail 7-6 after the touchdown.

DeSoto Central took advantage of an Olive Branch fumble late in the quarter to take over at the Quistor 46 yard line. Then, with the change of ends with the start of the second quarter, the Jaguars took the lead on the first play of the second quarter with a two-yard scoring run from Marquis Fields with 11:54 left in the half.  A run attempt on the two-point conversion was good, to give DeSoto Central a 14-7 lead.

Olive Branch would score late in the half on a one-yard dive by Preston Jeffries with 1:14 left to get within 14-13 Jaguars, but the extra point kick was blocked, and that would be the halftime score.

DeSoto Central took the second half kickoff and proceeded to eat up 9:30 of the third quarter on a drive that included a successful fourth down pass for a first down at Olive Branch one yard line.

Curry was injured as the Jaguars were close to scoring on the drive and Ford called on Jaden Norward to come in at quarterback and he would toss a six-yard pass to Branson Tita Nwa, who one-handed the pass in the deep corner of the end zone for a 20-13 lead 2:32 left in the quarter, a read on the scoreboard at the end of three quarters of play.

“Defensively, we had to make some adjustments to help us out,” Bowling said. “We turned the ball over a couple of times and you can’t do that in big games. We’re very fortunate that we were able to come away with the win.”

A key moment in the fourth quarter came when the Quistors fumbled the ball back to the Jags with 9:19 left, giving DeSoto Central a chance to milk the clock in the final minutes.

“Our offensive game plan was fine, we executed it every time except for that one time when they got a stop,” Ford said. “We made plays, we just didn’t make enough.”

The one stop in the fourth was the one where the Jaguars could not convert a first down, gave the ball back to Olive Branch, and put in motion the game-winning drive, finished by Walton’s last-minute heroics.

“This was a hostile environment, they played physically and coming away with a win has me very proud of my guys,” Bowling said.

“I was really proud of the way they played,” Ford said. “Nobody’s going to feel sorry for us, because we’ve gotta play Horn Lake next week.”