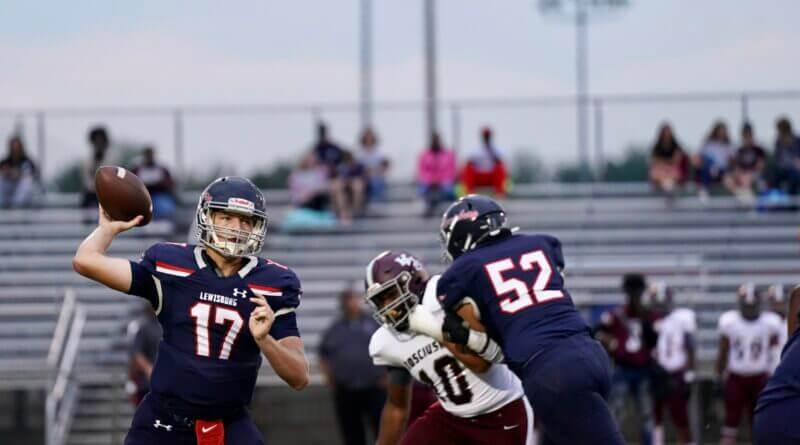 After an impressive 2-0 start to the high school football season, the Lewisburg Patriots were stopped and kept from making it 3-0 with Friday night’s 19-14 Kosciusko victory at Lewisburg.

Patriots quarterback Gunnar Gilmore and receiver Matthew Osteen gave Lewisburg an early 7-0 lead in the first quarter, as Gilmore threw an eight-yard pass to Osteen for the touchdown and a 7-0 lead.

But Kosciusko quarterback Caden Greer answered with the first of his two scores of the evening, running for an eight-yard score with 2:38 remaining in the quarter to tie the contest at 7-7 after one.

Greer would then connect with receiver Lee Wade for a 13-yard pass and a score with just 37.2 seconds left in the first half, however the extra point kick was blocked and Kosciusko went to halftime with a 13-7 lead.

Again, in the second half, Lewisburg scored first as Gilmore finished a drive with a short one-yard touchdown run in the final 32 seconds of the third quarter for a 14-13 lead Luca Gaschk again hit the extra point kick.

But Greer and the Whippets would answer again to score what became the winning points of the contest. Greer completed a Kosciusko drive with a 15-yard sweep off the right end for the touchdown. A try for two points came up short but the Whippets had a 19-14 lead they protected the rest of the contest.

Both teams are now 2-1 for the season, as Kosciusko recovered from a 20-7 loss to Winona the previous week. Lewisburg had forged a 2-0 record for just the second time in history before Friday’s loss.

DJ Green of Lewisburg led all rushers with 85 yards in 10 carries.

The Gators bounced back from an 0-2 start to win the traveling Lake Bowl trophy against rival Eagles.

Southaven won after a last-second pass completion by Lafayette came up just one yard short as time expired.

The Chargers scored a touchdown with 1:39 left to win the close contest.

The Yellowjackets took a 42-0 lead before Quistors’ Britten Taylor’s touchdown came with a 50-yard catch and run for a touchdown with 11:35 remaining in the contest.  Britten Taylor of Olive Branch has one catch for 50 yards and a touchdown.