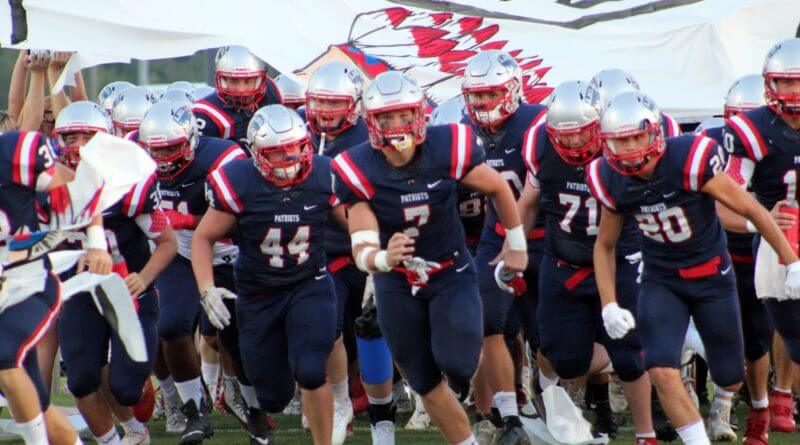 High school football is back in DeSoto County and at Lewisburg High School Friday night, the Patriots made sure there would be no lack of running offense on opening night.

The Patriots churned a total of 385 yards total offense, including 351 rushing yards, in upending the Byhalia Indians 44-13 at the James I. Brady Athletic Complex on the Lewisburg campus.

The running back tandem of Jason Hoffman and Blake Speed combined for a total of 237 yards rushing and four touchdowns in the victory. Hoffman ran for 159 yards, Speed rushed for 78 yards, and both backs scored twice.

“I think offensively we executed at a pretty high level,” said Lewisburg coach Matt Gehrke. “We made some mistakes for the first game and there was some stuff that was pretty sloppy.”

Speed opened the scoring with a six-yard touchdown run with just under eight minutes left in the first quarter. Hoffman then plunged over from two yards out about 1:45 later in the quarter to increase the lead to 14-0.

Byhalia answered with Rayderrious Proge galloping 34 yards for a score and getting the Indians within 14-7 with 1:20 remaining in the first quarter.

Lewisburg jumped on Byhalia and got the lead back to two touchdowns with 9:32 left in the first half, thanks for a nine-yard scoring run from Ledger Carroll, a touchdown that climaxed a 96-yard drive that began with an interception of a Byhalia pass at the Patriot four-yard line.

The Indians showed no quit, as DeQuan Moore went into the end zone to make the score 21-13 with 5:36 left before halftime. The extra point kick attempt was off target.

Hoffman then completed a busy first half for the scoreboard with an 11-yard touchdown run and a 28-13 lead at 5:25 left before intermission.

It was more Lewisburg in the third quarter from the very start. Julian Slocum Jr. took the opening second-half kickoff and found his way to paydirt 77 yards later for a 35-13 Patriot lead. Lewisburg added to that with Speed’s second score of the night, a six-yard run with 6:05 left in the third quarter and a 42-13 advantage.

“I thought we spread the ball out pretty well,” Gehrke said. “I think we had five different runners score touchdowns tonight. We have a good stable of backs that run the ball hard and do what we ask them to do.”

It was at that point the coaches determined the game could go to continuous timing for the remainder of the contest and a safety by Lewisburg in the fourth quarter would complete the scoring for the final 44-13 result.

The evening was marred by a fracas in front of the Lewisburg bench in the third quarter and players on both sides got involved. When it was broken up, four players, two from each team, went ejected and sent to the locker room.

Next week, Lewisburg plays at Arlington, Tennessee and Byhalia will have a week off. The Indians play on Friday, Sept. 18 at home against Center Hill.

Arlington, Tennessee defeated DeSoto Central 24-14 on the Tigers’ gridiron. It was Arlington’s (2-1) third game of the year and the season opener for the Jaguars. DeSoto Central held the early 6-0 lead in the game after a touchdown run from Richard Coleman.

Hernando hosted South Panola in the battle of Tigers and the visitors came away with a 14-13 victory, as Hernando nearly upset the third-ranked South Panola squad.  A missed game-winning field goal by Hernando kept them from pulling the upset.

The Northpoint Christian at Lausanne Collegiate contest was postponed with Northpoint school officials canceling extracurricular activities this week, the result of about 50 students found to either have coronavirus or have been in close contact with someone with the virus.