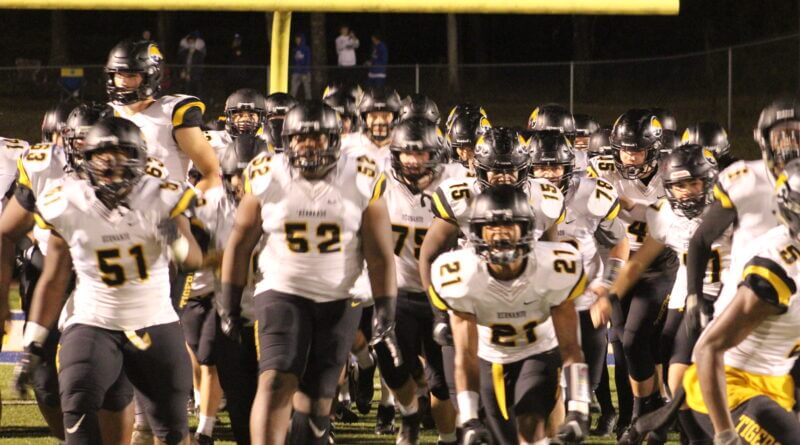 THE VITALS: Hernando’s football season came to an end with Friday’s 41-26 loss to Oxford in the second round of the MHSAA 6A state playoffs at Oxford Middle School. Hernando finishes the season with a record of 6-5.

“We had a good year and I was so pleased with how this team practiced and how they prepared,” said Hernando head coach Will Wolfe.

THE DETAILS: After taking the opening kickoff and moving the football downfield Hernando was forced to give the ball to the Chargers for the first time, which then marched and scored the game’s first touchdown on a one-yard run from Landon Speck with 4:13 left in the opening quarter. A pass completion in the end zone added two more points for an 8-0 lead.

Hernando had a chance to get on the scoreboard later in the quarter but a 35-yard field goal attempt went just left of the goal post.

However, the Tigers did get on the board early in the second quarter when quarterback Zach Wilcke found Reid Flanagan for a 26-yard scoring completion with 10 minutes left in the first half. A pass attempt for two points on the extra point try didn’t connect and Oxford still held the lead, at 8-6.

“They are our Dynamic Duo,” said Wolfe of the Wilcke-Flanagan combination. “They are great kids and great players and it’s just a pleasure to coach them.”

The Chargers added two field goals in the second quarter for a 14-6 before Hernando struck back with an eight-yard scoring run by Jarickas Williams with 24 seconds left in the half to get within 14-12 for Oxford.

The Chargers took advantage of the remaining time and got within range for a 21-yard field goal, which split the uprights and gave Oxford a 17-12 lead at halftime.

With Hernando taking the opening kickoff, Oxford started the second half with the football and promptly scored on its opening possession, a 17-yard pass completion to Trynten Brannon for a 24-12 lead. Later in the third quarter, Omar Howell scored from 20 yards away and a 36-yard field goal with just over five seconds remaining in the quarter gave the Chargers a 34-12 lead going into the final quarter.

Oxford finished its string of 27 unanswered points with Cam McJunkins’ five-yard run with just over two minutes left in the game.

“We got behind the chains with some penalties and they were able to make some big plays and we didn’t,” Wolfe said. “That was the difference in the game.”

Hernando would score twice in the final 92 seconds, however, starting with Jakolby Futtrell’s 61-yard blast into the end zone with 1:32 left for 41-19 Chargers lead. The Tigers recovered the onside kick after the Futtrell touchdown and scored again, as Wilcke found Flanagan one more time for a score with 27 seconds left and the final score of 41-26.

Oxford will play Clinton for the North Half championship and a spot in the state championship game on Nov. 27.