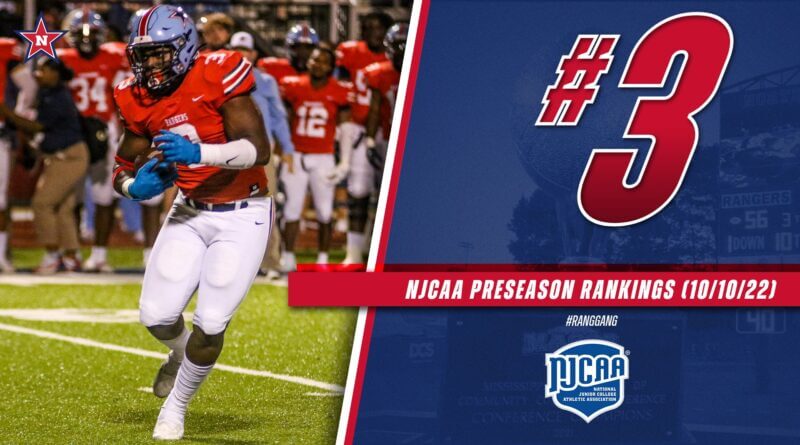 Rangers to travel to Coahoma on Thursday

For the first time since the preseason football rankings were released in mid-August, Northwest has finally moved up in this week’s NJCAA Division I poll.

With top-ranked New Mexico Military Institute losing to unranked Tyler Junior College (Texas) over the weekend and the Rangers’ recent 47-7 blowout of Mississippi Delta, Northwest has moved up a spot to No. 3 overall, trailing only new No. 1 Hutchinson (Kan.) and second-ranked Iowa Western.

Fellow MACCC program Jones College inched up to No. 4 in the rankings, while East Mississippi crept back up two slots to No. 9 overall.

Northwest (6-0, 3-0 MACCC North) will travel to Coahoma on Thursday, October 13. The Rangers are 44-2 all-time against the Tigers, but Coahoma is surging, having been nationally-ranked twice in the last two seasons. In last year’s meeting, Northwest pulled away in the second half for a 42-12 victory.

This week’s battle is a must-win for Coahoma (3-3, 1-2 MACCC North), as the Tigers look to remain in the playoff hunt following last week’s close 24-16 loss at EMCC. Coahoma’s offense is averaging 405.3 yards per game, with over 200 average rushing yards, while the Tiger defense is allowing just over 300 yards per game.

Those numbers are strikingly similar to Northwest, which is averaging 421 yards of total offense while allowing just 285 yards to their opponents. While the Rangers are coming in averaging 20 yards less on the ground than Coahoma, Northwest is making up for it with nearly 50 yards more on average through the air (239.5).

Kickoff between Northwest and Coahoma is scheduled for 6:30 p.m. in Clarksdale. Pregame coverage will begin at 6 p.m. on Ranger TV (nwccrangers.com/watch) and WHCQ-LD 8, with the game also available beginning at kickoff on Action News 5 Plus, available on your Roku, Apple TV or basic antenna (Channel 5.5).