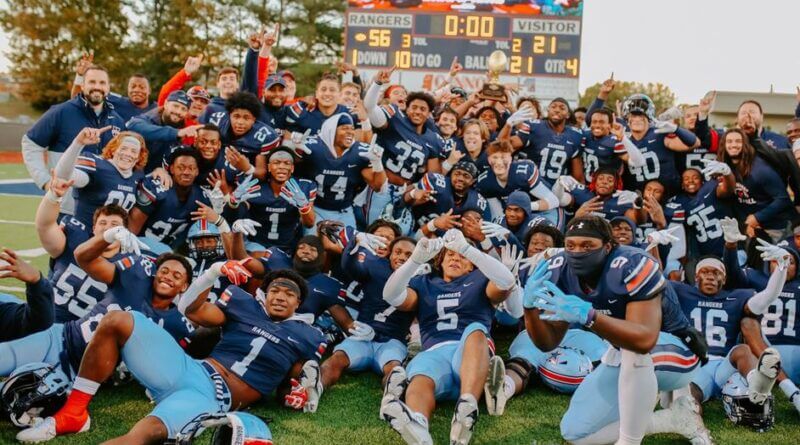 With the MACCC set to kick off its 2022 football season three months from today, back-to-back conference champion Northwest has released its schedule for the upcoming year.

This year’s slate features four regular season home games, beginning with the season-opener against Mississippi Gulf Coast on Thursday, Sept. 1. The Rangers and Bulldogs have gone back-and-forth over the past few seasons, with Northwest winning the last two meetings, including the 2020 battle that decided the conference and National Community College Football champion. The all-time series has been even between the two teams, with the Rangers owning a slight 21-20-2 edge.

From there, the Rangers will hit the road for two straight weeks at Hinds and Pearl River. Northwest will visit Hinds on Thursday, Sept. 8 for a rematch of the 2021 MACCC championship game, that ended in a 56-21 victory in Senatobia. It will be the Rangers’ first visit to Raymond since 2016, a trip that also resulted in a win for Northwest. In the all-time series, Northwest owns a 30-18-3 advantage against the Eagles.

Northwest will then make a visit to Pearl River on Thursday, Sept. 15, traveling to Poplarville for the first time since the 2017 campaign. That matchup also marked the last meeting between the Rangers and Wildcats, a game that resulted in a 34-21 win for Northwest. Pearl River is 26-13 all-time against the Rangers, one of the few MACCC teams that own a series lead over Northwest.

From there, the remainder of the schedule is focused solely on the MACCC North Division, beginning with a battle against Itawamba on Thursday, Sept. 22. This will mark the fourth year in a row that the Indians have visited Ranger Stadium at Bobby Franklin Field, with Northwest taking a 41-13 Homecoming victory last season. All-time, the Rangers are 41-26-1 against Itawamba.

In what has become the norm over the past decade, the showdown between Northwest and East Mississippi will likely shape up to be one of the nation’s most intriguing matchups of the season. This year’s edition will be held in Scooba on Thursday, September 29 at 7 P.M., with the Rangers seeking revenge after a 30-21 loss to the Lions last year. In the last eight meetings, both teams were nationally ranked by the NJCAA and at least one of the two teams has been ranked in 14 consecutive matchups between the Rangers and Lions, dating back to 2009. Northwest owns a 42-26-1 all-time record against EMCC.

Northwest will return to the friendly confines of Bobby Franklin Field on Thursday, October 6 against Mississippi Delta for one of its final two regular season home games. The Rangers and Trojans met in the season finale last year in Moorhead, with Northwest taking a 44-25 decision to earn its ninth straight win against MDCC and the 16th win in the last 17 meetings. In the all-time series, the Rangers are 45-23-2 against the Trojans.

Thursday, October 13 will mark the shortest road trip of the season for the Rangers, a one-hour drive down Highway 61 to Clarksdale to face Coahoma. Last season’s showdown featured an unranked Northwest team against a nationally-ranked Tigers’ club, but the end result was a 42-12 victory for the Rangers. All-time, Northwest is 44-2 against Coahoma, with the Tigers’ lone victories coming in 2005 and 2009.

Closing out the home portion of the schedule will be Homecoming against Holmes on Thursday, October 20. The game will mark the Bulldogs’ first trip to Senatobia since September 27, 2018, when the Rangers took a 27-14 victory against a ranked Holmes squad on Homecoming. Last season, Northwest routed Holmes in Goodman, 51-20, to improve the all-time series lead to 46-20-2. Additionally, Northwest has been largely successful in Homecoming games over the past decade, with the Rangers earning eight straight wins and victories in 11 of the last 12 Homecoming contests.

Northwest and Northeast will meet in Booneville for the regular season curtain call, set for Thursday, October 27 at 6:30 P.M. The Rangers took a 45-13 victory last season, but the two teams played in a thriller during the 2020 meeting in Booneville, where Northwest took a 34-28 overtime victory in a battle that ultimately decided the MACCC North Division champion. The Rangers are 41-18-2 all-time against the Tigers and have taken the last seven meetings.

Last season, Northwest finished 9-3 on the season and participated in the inaugural NJCAA Division I Football Playoffs, dropping a loss to No. 2 New Mexico Military Institute. Under seventh-year head coach Benjy Parker, the Rangers have made the postseason every year under Parker’s tenure and dating back to his span as an assistant coach from 2014-15.

All four of the Rangers’ home games will begin at 7 P.M., including Homecoming. Every game this season will once again be carried in HD on Ranger TV.