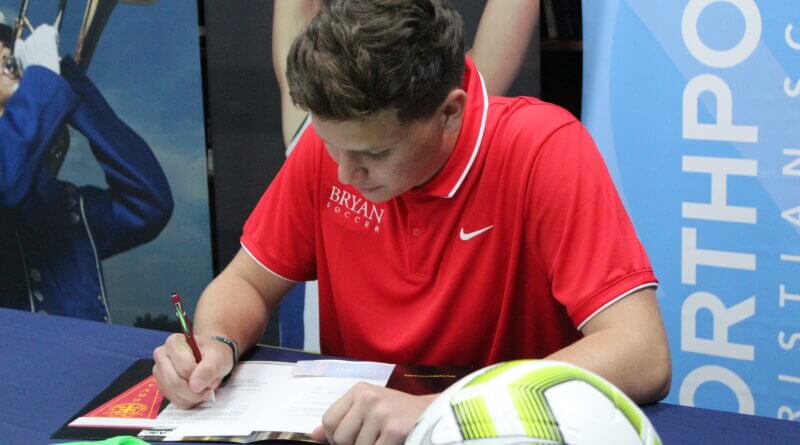 Northpoint Christian School senior goalkeeper Thomas McGee has come in as a transfer to the Southaven Christian school this year and solidified the back line for the Trojans in the spring boys’ soccer season thus far.

This week, McGee solidified another item: a solid offer to bring his goalkeeping talents to the next level, signing an offer to play soccer next season at Bryan College, a small Christian liberal arts school in Dayton, Tennessee, which is between Chattanooga and Knoxville.

In his first season with the Trojans, McGee has provided a big impact to the Northpoint defense, said coach Ethan McClure.

“He’s an excellent keeper,” McClure said. “He’s got several saves already this year that has kept us in games and he’s had a huge impact as being a great leader on the team.”

Bryan College men’s soccer coach Jeremy Davidson, who was there for the signing event in the school library, said McGee’s family recruited the school, instead of Davidson going after him.

However, once Davidson saw McGee in action at a tryout, the coach knew the young goalkeeper would be a great addition to the Lions’ roster.

“They (McGee’s family) actually contacted me and started to have some conversations,” Davidson said. “He was able to come out and visit the campus, train with our team and that was when we decided to make him an offer.”

Davidson, in his second year coaching at the school, said McGee has the right skills, and the right mind set, to be a successful goalkeeper at the college level.

“He’s a good sized kid, built to be a keeper, and he’s got the right mentality,” Davidson said. “To be a goalkeeper you have to have a little bit of a screw loose so he’s got that mentality of being fearless in the box and having control of the box.”

Davidson added that McGee has the right athletic tools and impressive hands in holding and handling the soccer ball.

McGee, who said he has lived in several places, including California and Florida before his family came to Cordova, Tennessee, where they now live, said he’s been playing soccer for several years.

Bryan College is a member of the Appalachian Athletic Conference and plays in the NAIA.

Davidson said McGee will be coming to be part of what’s already a successful program.

“We’re always one of the top teams in the conference,” Davidson explained. “We’re always looking for kids like Thomas who can contribute to the program and make us better.”