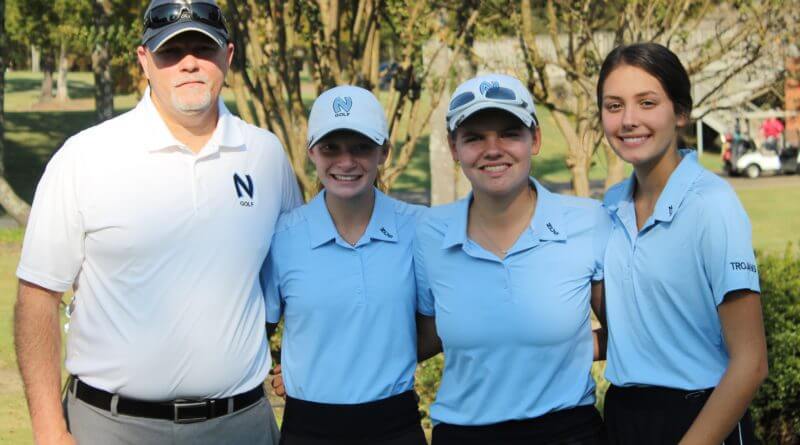 Is three times the charm at state for the Northpoint Christian School girls’ golf team? They certainly hope so, as the Lady Trojans get ready for another trip to the WillowBrook Golf Club in Manchester, Tenn. and their third straight run at a Tennessee Secondary Schools Athletic Association (TSSAA) Division II-A state championship.

The team is made up of senior Carla Kay Hickam and junior Ella Cress, both of whom are familiar with the WillowBrook layout they will be playing on Oct. 12-13. Cress has played there all three years that Northpoint has been in the event as a team. Hickam has also been there three straight years as part of the team, and her freshman season qualified as an individual.

They repeated this season as West Region champions and coach Brian Stephens said it’s been primarily due to the balance in scores that Hickam and Cress have produced on the course.

“Carla Kay and Ella this year have switched off back-and-forth being medalists at the regular season meets we have played in,” Stephens said. “Although this is an individual sport, they treat each other as a team. We’ve created a team atmosphere.”

The balance provides an advantage in producing good team scores. Stephens said it also makes for a friendly competition between the pair.

“It pushes them to try to earn medalist honors the next time they go out,” the Northpoint coach said. “If we can get them to fire off on all cylinders at state, I feel really good about our chances, with last year being a runner up finish, as well.”

Northpoint fell to Franklin Road Academy (Nashville, Tenn.) 299-314 in the run for the state championship and the Lady Trojans feel FRA might be the team to beat again this year.

“I would say the biggest competition would be Franklin Road Academy,” Stephens said. “They have the same two girls back this year. University School of Jackson (Tenn.) is also a very strong competitor. They were the runner up in our regional.”

Hickam has extra incentive this time because it is her last try for a state title before she plays at Christian Brothers University and their women’s golf program next season. Carla Kay last week committed to the CBU team.

“It’s my last time so I’m really hoping I can get it done this time,” Hickam said. “I think I can compete with the top competitors and I know Ella can too. It’s going to be a really good matchup.”

Cress, a junior, wants to see both her and Hickam come through with good scores next week.

“I’ve become really close friends with Carla Kay and for it to be her senior year, I really want us to both do well and try and win it,” Cress said. “We’re going to go out and have fun, because when we have fun, we play well.”

Players will be able to have a practice round and see where the approximate pin placements will be for the state tournament prior to teeing off on Monday. Hickam said WillowBrook is similar to courses in the Mid-South she plays on regularly.

‘We have courses around here that are pretty similar in difficulty, so I think we’re pretty well prepared here,” Hickam said.

Cress expects the difference for her will come in the back nine holes, which will be the first nine holes she plays.

“WillowBrook’s first 11 holes I can do really well,” Cress said. “My first nine holes may be pretty tough, so I hope I can get through that with a halfway decent score, because the final nine holes I can go low and shoot under par.”