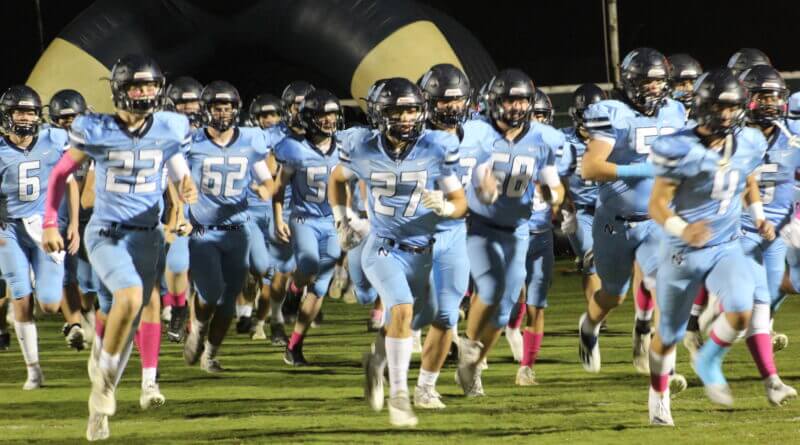 When Northpoint Christian School and St. Benedict at Auburndale (SBA) football teams learned they each had an open week the same week, the coaches got together and agreed to meet up Thursday night at Trojan Field on the Northpoint campus in Southaven.

“SBA reached out a couple of weeks ago and we were able to schedule it. Being a short week and coming off a big win, our guys stayed focused and did a good job,” said Gold after the Trojans had finished off a 63-18 pasting of the Eagles ahead of Northpoint going into a long Fall break weekend.

The night belonged to the Trojans from the very start. After SBA gave up the opening kickoff on a fumble, senior running back Josh Fisher scored the first of his two rushing touchdowns for the contest. The three-play drive finished with Fisher going over from three yards out for a 7-0 lead after the extra point kick with just 48 seconds gone in the ball game.

About three minutes later an Eagles drive stalled and SBA attempted a 49-yard field goal that fell short of the goal posts. The Northpoint offense took over and Fisher scored his second touchdown of the quarter with 5:21 remaining on an eight-yard run.  The kick try for a point struck the right upright, however, so the Trojans’ lead stood at 13-0.

J.R. Henderson finished off a drive after an Eagles’ pass was intercepted with a one-yard touchdown run and added two more points taking it in on the extra point try for a 28-0 lead. Northpoint added one more score with 34 seconds left in the quarter on a 57-yard pass reception from Jack Patterson to Jackson Thomason for a 28-0 lead after just 12 minutes of play.

In the second quarter, Patterson’s scoring connection continued with touchdown passes of 40 and 34 yards to Alex Wright and a second touchdown pass completion to Thomason of 48 yards. Carrasco got the Eagles on the scoreboard, taking a short kickoff back 50 yards for the first touchdown of the game for SBA, a score that cut the Northpoint lead to 35-6 with 9:35 remaining in the half. Carrasco also scored on a 16-yard reverse run for the Eagles’ second score of the half.

With the score 49-12 Northpoint at halftime the TSSAA mercy rule went into effect as the coaches agreed to a running clock for the second half. As the clock wound down, sophomore Grayson Alford went over from two and 49 yards and, lining up as a running back, SBA lineman Myles Morrow powered over from one yard out for the Eagles’ final score of the contest.  Alford’s second score came with 1:05 left and the clock moving to the game’s conclusion and the final 63-18 score.

As talented as quarterback Patterson and his backs and receivers are, Gold went first to credit the play of the five guys blocking up front.

With three games left in the season, the Trojans are 4-3 for the year with two of the last three games being the most important. Northpoint travels to Evangelical Christian School next week, and after hosting Sheffield (Memphis), the Trojans end the regular season at Lausanne Collegiate. The ECS and Lausanne games are district games that determine if the Trojans return to the TSSAA Division II-AA playoffs.