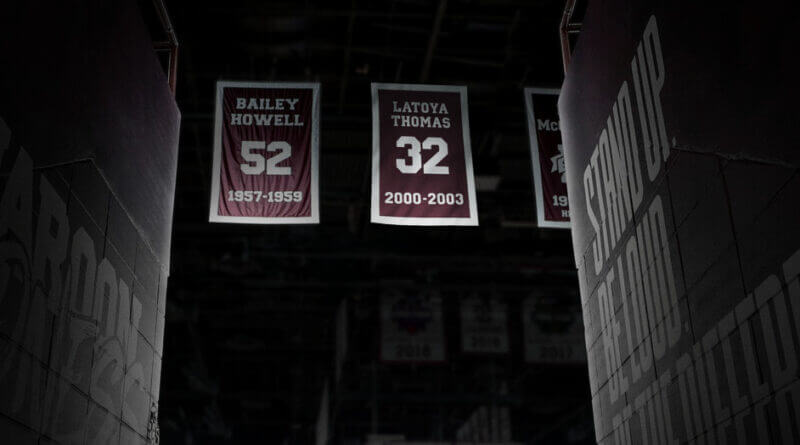 LaToya Thomas is one of the most remarkable women’s basketball players in Mississippi State history and one of the greatest athletes this university has ever seen. Thomas’ name will always be synonymous with greatness in Starkville, and from here on out, her name and number will forever hang in the rafters of Humphrey Coliseum.

On Nov. 11, Mississippi State will honor Thomas by commemorating her No. 32 jersey inside Humphrey Coliseum as she becomes the first female in Mississippi State history to have this honor bestowed upon her. Thomas joins a highly exclusive club with Bailey Howell, James “Babe” McCarthy and Jack Cristil as the only Bulldogs to have their names honored forever in Humphrey Coliseum.

Thomas, a native of Greenville, put together one of the most impressive careers at Mississippi State that culminated in her being drafted number one overall in the 2003 WNBA Draft by the Cleveland Rockers. With her No. 1 overall selection, Thomas became the first athlete from the state of Mississippi, male or female, to be drafted No. 1 overall to a professional league.

On her way to being drafted first overall, Thomas became the greatest women’s basketball player to wear the Maroon and White. She set numerous records, earned multiple awards, and helped put Mississippi State women’s basketball on the map.

Although Thomas graduated in 2003, she is still the record holder for the most career points scored in Mississippi State basketball history, men or women, with 2,981. She averaged 23.8 points per game in her career and scored more than 750 points in each of her final three seasons at State, including a program record 794 points during her senior campaign.

Almost two decades later, Thomas’ impressive offensive showing still has her ranked among the NCAA greats. Her 2,981 career points are ranked 14th on the all-time NCAA list, while her 23.8 career scoring average is ranked 16th. Both career totals rank second in SEC history. She became the eighth player in NCAA Division I history to score over 2,000 career points and record over 1,000 career rebounds.

While becoming the program’s most prolific scorer, Thomas was recognized nationally with numerous awards and honors. Thomas was a four-time Kodak All-American, becoming just the sixth player in the award’s history to earn that distinction. Thomas was also named to the AP All-America Team three times in her career. Additional All-America honors that Thomas earned were: Basketball Time (2002), USBWA (2002 and 2003), Women’s Basketball Journal (2000 and 2001), Gballmag.com (2001 and 2002), and WomensCollegeHoops.com (2001, 2002, and 2003).

On the conference level, Thomas earned back-to-back SEC Player of the Year honors in 2002 and 2003 and was a four-time selection on both the All-SEC First Team and the Associated Press All-SEC Team. As a freshman in 2000, Thomas was named the SEC Newcomer of the Year, SEC Freshman of the Year and helped her head coach, Sharon Fanning-Otis, earn the program’s first SEC Coach of the Year honor. She made two SEC All-Tournament Teams and was named the tournament’s MVP in 2000. The seven-time SEC Player of the Week was the first SEC women’s basketball player to lead the league in scoring for four straight years. She was inducted into the Mississippi State Hall of Fame in 2015.

Following one of the most extraordinary collegiate basketball careers to date, Thomas was selected with the No. 1 overall pick in the 2003 WNBA Draft by the Cleveland Rockers. During her rookie season, Thomas became the club’s single-season rookie leader in rebounds with 164 and ranked second in scoring with 346 points. In three playoff games against the eventual WNBA Champion Detroit Shock, Thomas averaged 13.7 points and 7.7 rebounds in the three-game series.

Thomas’ WNBA career spanned six seasons and 150 career games. She averaged 9.3 points and 3.6 rebounds per game in her career while playing for some of the biggest franchises, including the LA Sparks and Minnesota Lynx.