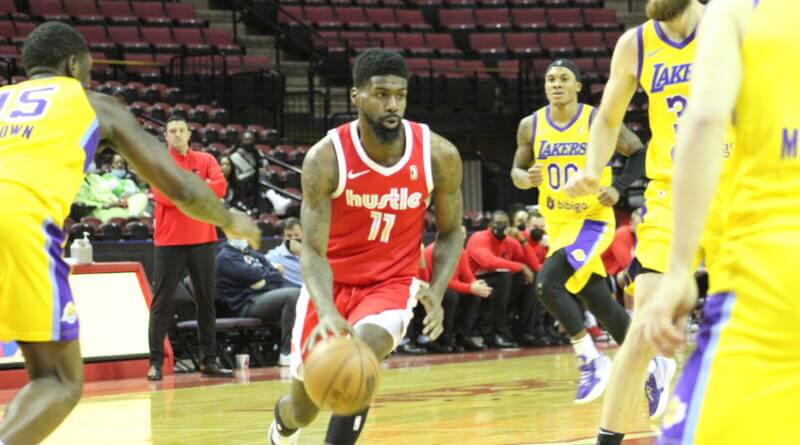 It was “bonus basketball” for Memphis Hustle fans Wednesday night at the Landers Center in Southaven, with those fans hoping to see a four-game losing streak erased.

But a heroic effort of coming back from 16 points down to tie the game and send it to “bonus basketball” ended as another “L” of a 127-124 NBA G League overtime loss to the South Bay Lakers, making it five straight losses since a two-game sweep of the Skyforce in Sioux Falls, South Dakota in mid-January.

The loss overshadowed a 29-point effort by Shaq Buchanan, 14 of which came in the first half. Memphis, 2-7 on the season, actually got a total of seven players to finish in double figures, but it wasn’t enough to halt the current skid.

Buchanan said the team remains confident the victories will come.

“The losses don’t define our team,” Buchanan said after the game, “Everybody wants to win, but we just have to get healthy. Winning is going to come.”

Gillespie’s playing time was quickly halted when a third-quarter collision caused an apparent knee injury that kept him off the floor for the rest of the game. That depleted an already short bench, even shorter, down to seven players to play the rest of the contest.

However, South Bay got 32 points from Mason Jones and 29 points from Chaundee Brown Jr. Four others were in double figures, but no one had more that 13 points for the Lakers.

The Hustle opened Wednesday’s game with a 36-27 lead in a first quarter that saw Memphis leading by as much asd 13 points.

South Bay nearly turned that completely around in the second quarter to close the gap to 62-60 for the Hustle at halftime.

Memphis coach Jason March has talked about one quarter always being a struggle for his team in recent games. Wednesday night, that turned out to be the third quarter, when the Hustle were held to just 22 points as South Bay took a 92-84 lead.

Things were starting to look bleak when the Lakers took a 106-90 lead in the fourth quarter but the Hustle was able to slice into the lead with a 19-point run for 107-106 lead late in the period.

Regulation time ended with the teams tied at 119-119. South Bay outscored Memphis 8-5 in the two-minute overtime period and when Tyrell Terry’s three-point shot fell short as the final horn sounded, South Bay (5-2) had come away with the victory.

The good news for the Hustle is that the team now has nearly a week to rest and heal, as the next game for Memphis won’t be until Wednesday, Feb. 2 at home against the Iowa Wolves.

“We’ve got a nice little break here and we need it very badly,” March said. “Hopefully that’s what we’ll use it for, to get healthy.”