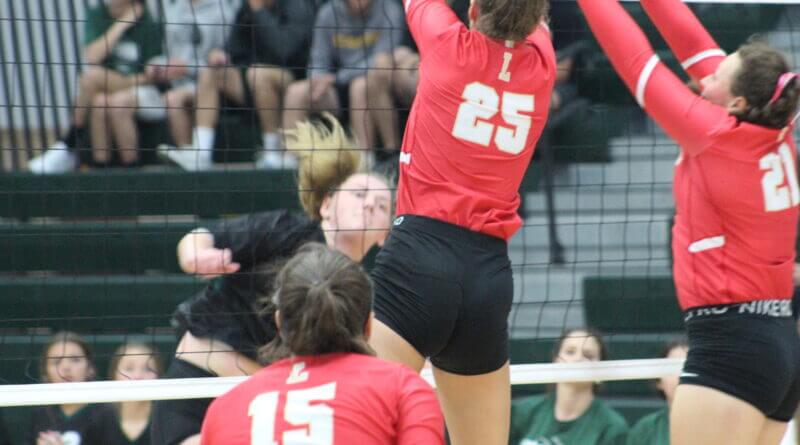 Lake Cormorant volleyball now knows where the road to return to the MHSAA 5A state volleyball championship will start in defense of last year’s title.

It will start Tuesday night at Cleveland Central in the first round of this year’s playoff series,

Instead of winning the Region 1-5A title and getting the number one seed, the Lady Gators are the number two seed from the region, and Lafayette (Oxford) won the region title with Wednesday night’s 3-0 victory on the Lake Cormorant court.

Wednesday’s match, moved from earlier in the season due to a conflict request to move from Lafayette, was the second of three straight matches for the Lady Gators. Lake Cormorant played five sets against Hernando in a day game on Tuesday and will come back tonight (Thursday) for Senior Night against Olive Branch before the playoffs begin next week.

In Wednesday’s contest, the Lady Gators had an early lead in the first set, at 9-7 when Ivori Walls scored off a Lafayette block.  The Lady Dores recovered and had a 15-12 lead, but the Lady Gators then bounced back and retook the lead at 16-15 with Lundyn Wilson’s kill.

When Lafayette took back the lead at 22-20, Lady Gator coach Christina Morgan called a timeout, but even with Jillian Malone’s drop shot getting Lake Cormorant within 22-23, the Lady Dores scored the last two points for the first set win.

After trailing 3-1 in the third set, Lake Cormorant bounced back to take a 4-3 lead with Jasmine Chacon’s service ace. The Lady Gators forged a 9-5 lead in the third set, but the Lady Dores again recovered to put the set and match away.

A service run of points put Lafayette ahead 16-10 from a 9-9 tie with Morgan then calling another timeout. Hannah Woodiel served an ace to pull the Lady Gators back within 12-16, but four of the next five points went to Lafayette for a 20-13 lead.  Lake Cormorant would get no closer than four points from there and the Lady Dores took a 25-19 set win and a three-set match victory.

“We made too many offensive errors,” Morgan said. “We hit a lot of balls out of bounds. Their front line played really well and we struggled blocking them. It took a little bit towards the end before we figured out that rhythm of blocking.”

If Lake Cormorant gets past Cleveland Central in the first round on Tuesday, they would play either New Hope (Columbus) or Canton in the second round the following Thursday.