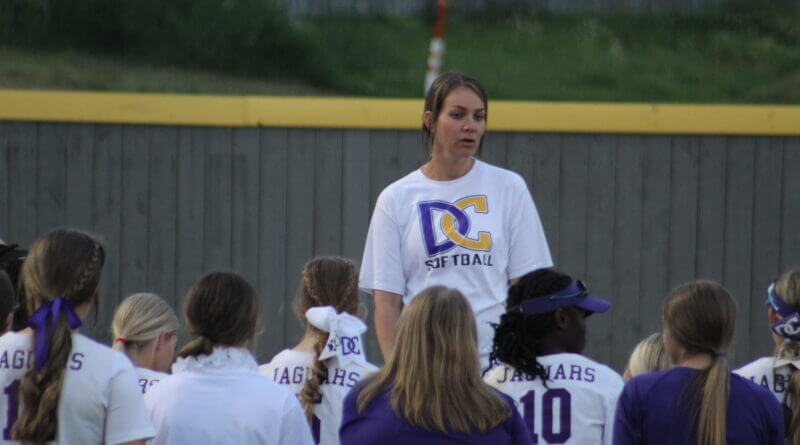 The MHSAA 6A softball playoffs began Thursday night with the DeSoto Central Lady Jags holding off the Tupelo Lady Wave 2-1 to take a 1-0 lead in the best-of-three second round series.

Game two of the series comes Saturday in Tupelo, starting at 12 noon.

DeSoto Central had to rely on the dominating pitching performance of Megan Vinson, who struck out 12 Lady Wave batters in posting the victory on the “bump.”

All the offense happened in the first inning. Tupelo scored in their first at-bat with a run, but the Lady Jags answered with their two runs in the bottom of the first.

In the first inning, Reagan Dale smashed a long single off the right-center field wall and Vinson then followed with a bouncing single to center. Mattie Melton brought both Dale and Vinson home with a single.

At that point, Vinson took over, allowing just three hits for the game, while fanning 12 and walking just one.  Tupelo went two straight innings without a runner and when the Lady Wave put two on in the fourth inning, Vinson and the Lady Jags squelched any threat without a run being scored.

Vinson helped her pitching cause at the plate with a pair of hits among the eight hits the Lady Jags mustered.

The teams got a jump on the playoffs by playing Thursday night as a courtesy to Tupelo, who has a handful of players also set to compete this week at the MHSAA 6A state track meet.

SPORTS ETC.: Northpoint Christian sophomore Christian Gilliland was named by the Tennessee Sportswriters Association to the state Division II-A all-state team, The 6-2 point guard was among the top scorers in the Memphis metro area last season, averaging 26 points a game for the Trojans.

Prep Softball – MHSAA 6A Second Round Playoffs – Best of three

SPORTS ETC.: Northpoint Christian sophomore Christian Gilliland was named by the Tennessee Sportswriters Association to the state Division II-A all-state team, The 6-2 point guard was among the top scorers in the Memphis metro area last season, averaging 26 points a game for the Trojans.