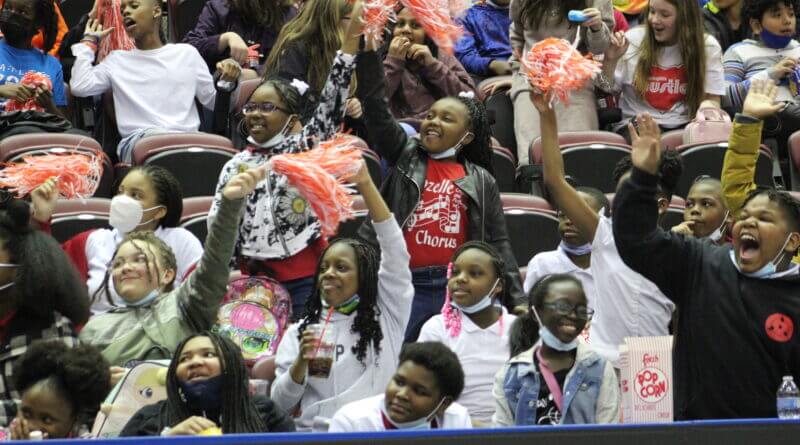 The Memphis Hustle entertained nearly 2,000 youngsters with their brand of NBA G League basketball Thursday morning, even taking their game with Iowa to two overtimes.

However, the Iowa Wolves (8-6) sent the young fans back to class a bit disconsolate, but happy for the experience, after a 111-106 double-overtime victory at the Landers Center. It was the annual Financial Literacy Day game.

The Hustle (4-10) were seemingly beyond life support with less than two minutes left in the fourth quarter, trailing 103-99. But a Reggie Hearn three-pointer with 6.9 seconds left got Memphis within 103-102, and after an Iowa free throw, the Hustle’s Ahmad Caver then took the ball and raced in for a tying layup just before the horn sounded to tie the game at 104-104 and send the game into the two-minute overtime period.

“Reggie Hearn made some huge plays,” said Memphis Hustle head coach Jason March. “Those are winning plays but unfortunately we didn’t make any buckets to finish it off.”

Each team traded baskets in the first overtime period, requiring another two-minute extra session. It was during the second overtime the Wolves outscored the Hustle 5-0, climaxed by Isaiah Briscoe’s three-point shot from distance to clinch the contest.

“We fought like heck to stay in there and finish the regulation well,” March said. “Our guys played their tails off, we competed and it was a good effort.”

Iowa, the Minnesota Timberwolves’ G League franchise, took a 30-22 lead after one quarter, led by 12 points from Brian Bowen II. EJ Onu countered with six points for the Hustle, one of six Memphis players to score in the quarter.

In addition to trailing on the scoreboard at the end of the quarter, the Hustle also lost guard David Stockton, whose apparent reaction to a call earned him two quick technical fouls and an ejection. Stockton’s departure came with 1:11 left in the quarter.

The Hustle rebounded in the second quarter to get within one at 49-48 at halftime, as Onu finished the first half with 11 points and Ben Moore added 10 for the half.

Moore, a new addition to the roster playing in just his second game with the Hustle, played collegiately at Southern Methodist and has been playing pro ball since 2017. The time includes stints with Indiana and San Antonio in the NBA.

March said he’s been with the Hustle for less than a week.

“No matter what role he’s in, he is as professional as they come and has been around for a long time,” March said about Moore. “Once he gets more comfortable in the system I think he’s going to continue to contribute.”

Iowa recovered in the third quarter for an 80-74 lead after three quarters as Bowen reached 23 points for the game, while Moore had 14, Onu 13, and Shaq Buchanan with 12 for Memphis.

The Hustle outscored the Wolves 30-24 in the final quarter to force overtime.

For the game, Moore led the Hustle with 22 points, one of six players in double figures, and earned a double-double with 10 rebounds along with his 22 points. Onu finished with 17, Hearn scored 15, Buchanan 14, Caver had 12 and Tyrell Terry added 11.

Bowen and Matt Lewis each earned double-doubles for Iowa. Bowen scored 24 points and had 11 boards, and Lewis scored 13 points with 10 rebounds.

March added the team appreciated having all of the fans in the building to cheer them on. The students came from schools in DeSoto County and the Memphis area.

The next four Hustle contests are all home games, beginning with a two-game set with Oklahoma City Sunday afternoon at 1 p.m. and again Monday night at 7 p.m. in the Landers Center.