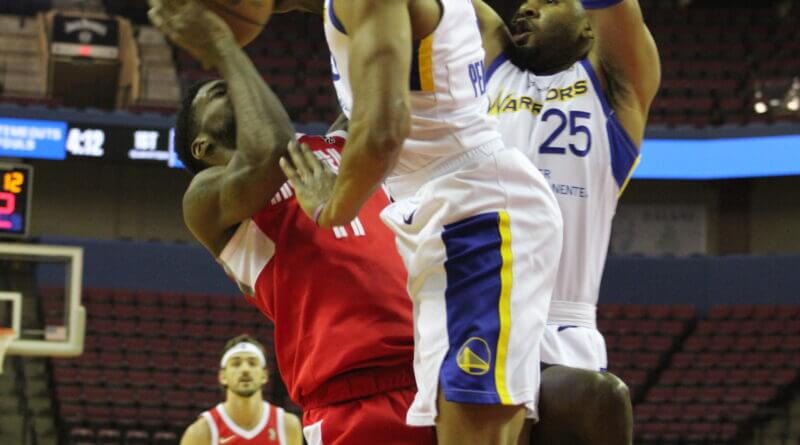 Figueroa’s shot at the end finished a Santa Cruz comeback

LJ Figueroa’s floater in the lane as time expired gave the Santa Cruz Warriors a 132-130 overtime victory over the Memphis Hustle Monday night at the Landers Center.

Figueroa, a Golden State affiliated player, hit the shot off an inbounds play with 2.1 seconds remaining in the NBA G League’s two-minute overtime period. It climaxed a 17-point effort for the former Oregon Duck and helped the Warriors recover from a 66-53 Memphis lead at halftime.

Hustle guard David Stockton, son of NBA Hall of Fame great John Stockton, hit a season-high 31 points to lead Memphis in scoring and he was one of six Hustle players hitting in double figures. Twenty of Stockton’s 31 points came in the first half.

“He plays hard and gives you everything he has every time he’s on the floor,” coach Jason March said about Stockton.

Memphis also got offensive production from Cameron Young, a second-year pro from Quinnipiac, who finished with 22 points. Tyler Hagedorn, a rookie from South Dakota, finished with 20 points, Reggie Hearn scored 17, followed by Tyrell Terry with 12 and Shaq Buchanan with 10. Buchanan, coming back to the Hustle after an NBA callup to the parent Memphis Grizzlies, was held back to only 12 minutes played in the contest.

The Hustle did play with a more full roster, with more bodies compared to nights during the Showcase Cup where the bench was very thin.

“We’ve played four games this season (Showcase Cup) with seven players,” said March. “All the credit to our guys who have given their effort and staying together. It was very nice to have guys in jerseys, that’s for sure.”

Memphis benefited from having three new additions to the roster in Terry, Josh Nzeakor, and Devin Whitfield.  Terry is a two-way player from Stanford, Whitfield is a rookie from the player pool from Lincoln Memorial University, and Nzeakor is also from the player pool with two years of pro experience and played collegiately at Lamar.

Moses Moody, a Golden State assignee, led all scorers with 37 points in the victory. Quinndary Witherspoon, a former Mississippi State Bulldog, contributed 34 points for Santa Cruz, followed by Figueroa’s 17, Jonathan Kuminga with 11, and Jordan Bell with 10.

Memphis opened a four-point lead after one quarter and broke the game open in the second quarter for the 13-point advantage going into the locker room. Stockton’s 20 points in the first half included 4-of-5 shooting from three-point range. He was the only Hustle player in double figures in the first half.

Witherspoon also scored 20 points in the first half and got help from Moody, who scored 16 of his 37 points before halftime.

Santa Cruz came out of the locker room at intermission and cut the Memphis lead to 92-88 at the end of the third quarter, a period highlighted by the 65-foot three-foot heave from Terry that went in just as the quarter ended.

The Hustle continued to hold off the Warriors in the fourth quarter until Santa Cruz finally tied the game at 106 with about six minutes left in regulation.  That was part of a 10-point run by the Warriors that ended with Santa Cruz ahead 111-106 before Memphis finally found the scoreboard again.

Memphis could have won the game in regulation with a 126-123 lead and two seconds left, but a foul on a three-point shot sent Witherspoon to the free throw line, where his three charity tosses tied the game and sent it into overtime.

That set up the extra period and Figueroa’s heroics at the end.

Monday’s game was the start of the actual shortened regular season for Hustle as the previous games were part of the NBA G League Showcase Cup. Two games that were originally scheduled earlier than Monday’s contest were postponed by the NBA due to COVID-19 concerns but have been rescheduled.

The Hustle are now on the road for six games, starting Thursday in Des Moines, Iowa against the Iowa Wolves.

HUSTLE NOTES: Memphis finished the night with 22 three-pointers, one shy of the team record for three-pointers in one contest…Memphis held Santa Cruz to 22 percent three-point shooting in the first half, but the Warriors shot 55 percent from the floor and 44 percent from beyond the arc in the second half…Santa Cruz outscored Memphis 66-34 for points in the paint…Memphis at one time in the game had a 16-point lead. The Warriors scored 79 points in the second half and the overtime.