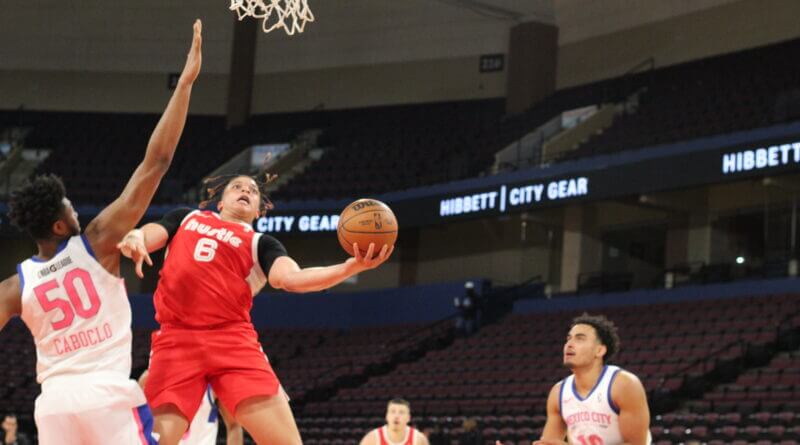 Photo: Kenneth Lofton Jr. of the Memphis Hustle in action earlier this season at the Landers Center. (Bob Bakken/desotocountynews.com)

Kenneth Lofton Jr. led the Hustle (10-7) with 23 points and 11 rebounds, his 11th 20-point performance and sixth double-double of the Showcase Cup, while Dakota Mathias added 20 points. Matthew Hurt scored 17 points off the bench, and Jacob Gilyard registered 14 points on 6-of-7 shooting and nine assists.

Nuni Omot scored 19 points off the bench, while James Akinjo and DaQuan Jeffries chipped in with 17 points and 16 points, respectively, for the Knicks (6-11).

Memphis ended the game on a 12-2 run and scored the final eight points, including two 3-pointers from Mathias, to reach the target score of 101. The Hustle shot 12-of-17 from the field (.706) to outscore the Knicks 27-14 in the final frame after Westchester won the third period 37-18.

Memphis outrebounded Westchester 55-35, including a 9-2 margin in the fourth quarter. The Hustle also doubled up the Knicks 56-28 in paint points and limited Westchester to just 36.8 percent shooting in the paint.

Following the Winter Showcase, the Hustle will begin their 32-game regular season slate, starting with a home back-to-back against the South Bay Lakers from Dec. 29-30 at Landers Center.