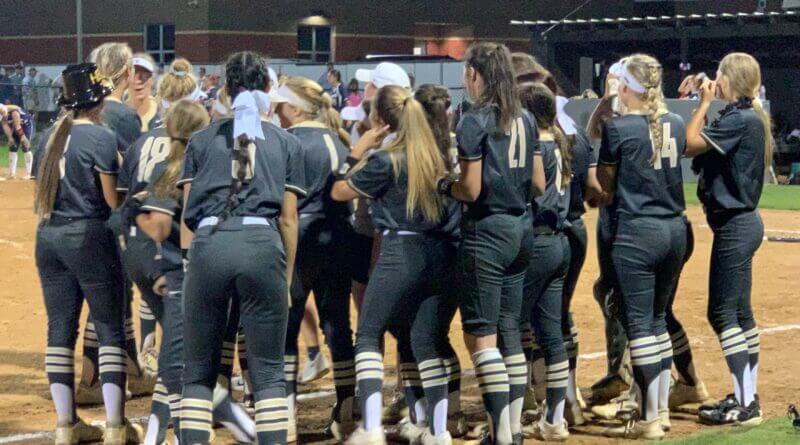 Photo: Hernando softball players celebrate their victory over Lewisburg that sends the Lady Tigers to the MHSAA 6A North Half championship series. (Bob Bakken/DeSoto County Sports)

The rematch Hernando’s Lady Tiger softball team had been waiting two years for is about to happen.

Hernando was ousted by eventual state champion DeSoto Central in the 2019 MHSAA 6A North Half finals and the Lady Tigers were looking forward to tangling with the Lady Jags in the playoffs once again.

Coronavirus kept the teams from meeting last spring, as the spring sports season was canceled with the pandemic.

This season, Hernando has been headlong into a drive to reach the North Half finals once again and Saturday the Lady Tigers were able to accomplish that. But first, Hernando had to get past county and neighborhood rival Lewisburg to do it.

Jalynn Taylor smacked a three-run homer to open the scoring for the Lady Patriots, which also scored two runs in the second and another in the sixth inning.

“Jalynn’s been great for us, she’s been a solid hitter at the plate,” said Lewisburg coach Brooke Lee after the victory. “She’s consistent and level-headed, so she worked really hard for that.”

“There’s nothing like the heart of a senior in the playoffs,” Lee said of her pitcher..

Lewisburg bunched together 11 hits in the contest, led by Madalyn Tubbs and Natalie Gilmore with three hits each.

Avery Wolfe paced the Hernando offense with two hits in three at bats.

Down 1-0, Hernando needed to win twice to move into the North Half finals and the Lady Tigers did just that Saturday, winning the first game 3-1 and then taking the nightcap and series decider 5-1.

In the first game, Emme Muizers’ single scored Jaclyn Carter in the bottom of the first for a 1-0 Hernando lead, followed in the fourth inning by Rylee Eyster’s two-run double.

Lewisburg’s lone run of the game came in the fifth when a single by Madalyn Savage scored Kaylee Reed.

Julia Shaw got the pitching win, despite allowing 11 hits. Dickerson allowed three hits and struck out five, but walked six and two of the three Hernando runs were unearned.

In Game Three, Hernando once again opened the scoring early with a pair of runs in the first inning, followed by single runs in the second and third. The Lady Tigers added another run in the sixth.

Lewisburg’s lone run came in the Lady Patriots’ last at bat in the seventh inning.

“My slider, actually,” Janna Shaw said, when asked about what pitch was working for her. “My curve ball was also on.”

Dickerson, pitching both sides of the playoff doubleheader for Lewisburg, struck out seven, but walked five and allowed three earned runs of the five scored by the Lady Tigers.

Janna Shaw and Wolfe both hit safely twice in the victory.  Seven separate Lady Patriots had one hit apiece in the loss.

“DC’s a great group to play,” Janna Shaw said about the upcoming rematch. “It’s going to be a good series. A lot of us have played together since we were little and grew up with each other.”

Lewisburg ended its season with a 20-10 record after the twin losses against Hernando, which now gets set to play DeSoto Central for the right to play in the 6A state softball championship series in Hattiesburg.