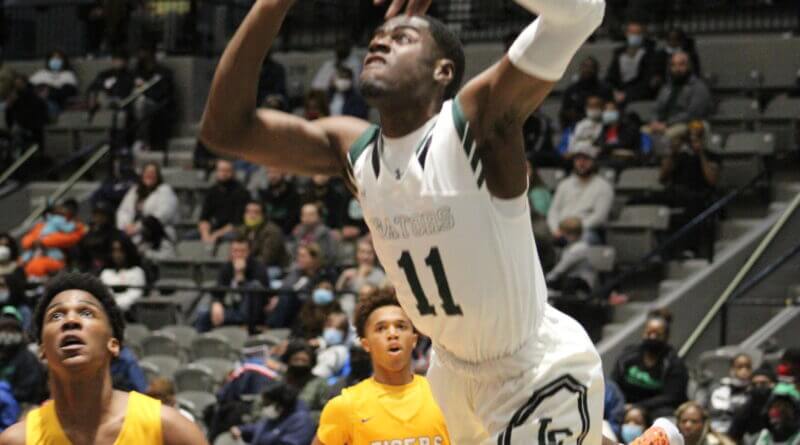 Photo: Marshall Odum flies toward the basket and between Hattiesburg defenders during Tuesday’s MHSAA 5A state semifinal win by the Gators. (Bob Bakken/DeSoto County Sports)

In the Lake Cormorant Gators’ first trip to the MHSAA 5A state boys basketball tournament, the Gators will make one more trip to the Big House floor this week. This time it will be playing for a state championship.

Lake Cormorant outlasted Hattiesburg 56-51 in the first 5A semifinal game at Mississippi Coliseum Tuesday evening. Their opponent will be either Holmes County Central or Forest Hill at 5 p.m. on Friday night at the Coliseum, lovingly called The Big House.

To say Tuesday’s victory was a basketball work of art would be a gross misstatement and Gators’ coach Bryant Worsham would quickly agree. Coming off a huge 80-75 double-overtime victory over Callaway in the state quarterfinals Saturday at Lake Cormorant, the Gators showed rust and a big letdown coming off the high of the state’s biggest postseason upset of 2021.

“We knew there would be a bit of a letdown after Saturday because emotionally that was a really big time win,” Worsham said. “Our defensive effort there, we were flying around, we just couldn’t seem to buy a basketball.”

Layups were falling off, free throws rattled away, usually deadly three-pointers were clanging off.

Fortunately for the Gators, Hattiesburg was having an even harder time trying to put the basketball down the basket.

Lake Cormorant took a 17-14 lead into the second quarter with Keithean “KB” Brooks scoring five of his game-high 19 points in the opening eight minutes.

Damian McKnight scored a three-pointer and added a pair of free throws for another five points in the quarter.

Hattiesburg started the second quarter taking a one-point lead at 21-20 before Lake Cormorant pushed the lead back to six points and 28-22 at halftime.

The Gators were able to break the contest open a bit in the third quarter, leading by as much as 14 points at 41-27 when the quarter ended.

However, Hattiesburg started to chip into the lead in the fourth quarter as Lake Cormorant’s shooting woes started to show up.

McKnight fouled out of the game with 1:55 left, but with seconds remaining Brooks scored his final two points of the night at the free throw line to give Lake Cormorant a 56-51 victory and a spot in the state championship game.

Donovan Sanders followed Brooks with 15 points for the night, with eight coming in the third quarter when the Gators were able to break out to their largest lead of the game.

Worsham expects the shooting issues of Tuesday night won’t be part of the Gators’ game on Friday.

“Now we know what to expect, we’ll just be locked in ready to play.”

See all of DeSoto County’s basketball playoff scores when you CLICK HERE.

One thought on “Gators survive to play in 5A state final”