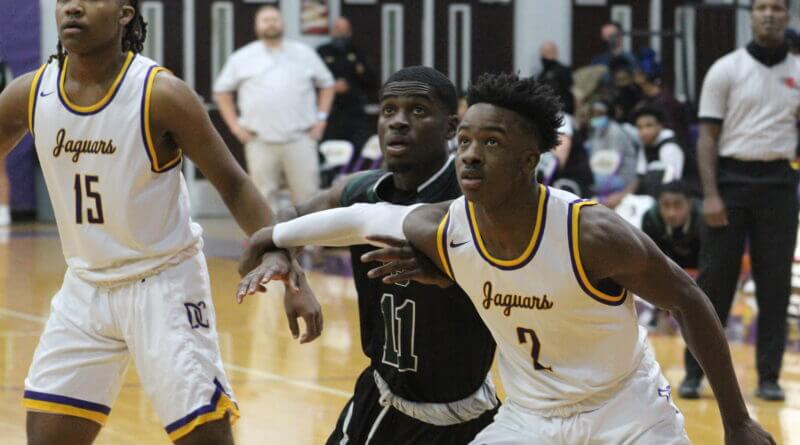 THE VITALS: Lake Cormorant basketball teams traveled to DeSoto Central Tuesday night for a boy-girl doubleheader as the December portion of the high school schedule began. The Lady Jags prevailed in their girls basketball contest 72-35 over the Lady Gators, while the Gators rallied in the fourth quarter for a 73-59 victory over the Jaguars in the boys’ game.

The Lady Jags, playing their first game back since Thanksgiving, got off to a slow start but held a 14-8 lead after one quarter.

DeSoto Central then put together a 19-point second quarter to take a 33-12 lead at halftime, holding the Lady Gators to just four points in the second eight-minute period.

Guard Janiya Jones led the way for DeSoto Central in the first half with 19 of her game-high 27 points.

“She’s been playing pretty solid for us,” said DeSoto Central coach Gwen Johnson Petty. “We were struggling for offense in the first quarter but she came ready to play tonight and she came out with a good effort.”

Tanawa Bratcher added seven more for the Lady Jags in the first half.

Meanwhile, Malaesia Liddell countered with six of her team-high 12 points in the opening half for Lake Cormorant.

“She’s one of my hardest workers,” said Lake Cormorant coach Justin Neely about Liddell. “She can do everything. Dribble it, handle it, shoot it and pass, whatever we need her to do she does. She definitely does her part.”

DeSoto Central added to the lead in the second half, outscoring the Lady Gators 21-11 in third quarter for a 54-23 edge on their way to the final 72-35 score.

Thalian Payne scored 11 of her 15 points in the second half and Bratcher added 12 points for the game for the Lady Jags.

“DeSoto Central is a great team and we tried our best to stay with them,” Neely, coaching the Lake Cormorant program in his second year, said. “It’s all about improving and getting ready for the postseason.”

The Oxford game was moved to Thursday to accommodate Oxford’s football team playing in the MHSAA 6A state championship contest on Friday.

Lake Cormorant boys 73, DeSoto Central 59: The Gators are climbing up the ladder in the state boys’ basketball rankings.

Maxpreps, the national prep sports reporting service, this week ranked Lake Cormorant as the top team in Mississippi’s MHSAA 5A and 15th overall in the state. County and district rival Center Hill is right behind the Gators at number two in Class 5A.

Lake Cormorant Tuesday night came out and showed their 6A county counterpart DeSoto Central the firepower the Gators can provide, rallying in the final quarter to defeat the Jaguars 73-59 in the doubleheader nightcap.

The visiting Gators held a 16-12 lead at the end of the first quarter but clung to a slim 35-34 lead at intermission.

“We came out flat in the first quarter and then Sanders and Brooks locked in on defense and everybody started crashing boards, and once our motor got going we’re hard to stop,” said Lake Cormorant coach Bryant Worsham.

KB Brooks and Donovan Sanders powered the Lake Cormorant offense with 12 points each in the first half.

“When they’re locked in, they’re hard to guard,” Gators coach Bryant Worsham said about the pair.

The Jaguars countered with Matthew Smith, who knocked down 15 of his game-high 22 points in the opening 16 minutes of play. De’Onte Greene scored nine of his 14 points for the contest in the first half.

“At times it looks like Smith’s going to be our big gun this year,” said assistant coach Hayden Basil. “But then De’Onte Greene has flashes. Matt’s known around here as the top guy but I think we have definitely more pieces that can hang around and score with him.”

DeSoto Central came out in the third quarter by outscoring the Gators 15-11 in the period to fashion a 49-46 lead going into the final eight minutes. But Lake Cormorant stormed out with a 27-point fourth quarter to claim the 14-point victory, while holding the Jaguars to 10 points.

Sanders finished with a team-high 20 points for the Gators and Brooks provided 18 more, while Marshall Odum scored 16 points for Lake Cormorant in the victory, the Gators’ sixth in seven games this season.

“I feel like we were prepped and we executed our game plan to the best of our ability, up until the last couple minutes of the game,” Basil said.

Worsham likes the improving team he has put together this year.

“We’re learning smart shots and we’re not taking as many forced shots,” Worsham said. “A couple of games ago, we would turn the ball over when double-teamed, we would try to do too much dribbling. Now we’re making the extra pass and that makes us tough to guard.”

With the current top two teams in the state being in the same district, Lake Cormorant and Center Hill can be considered the top basketball squads in DeSoto County and their district battles could be tough tickets to get.

“It should be fun with Center Hill,” Worsham said. “We’re looking forward to locking horns. We’ve got those dates circled. It’s going to be a fun matchup, I hope we play them four times.”