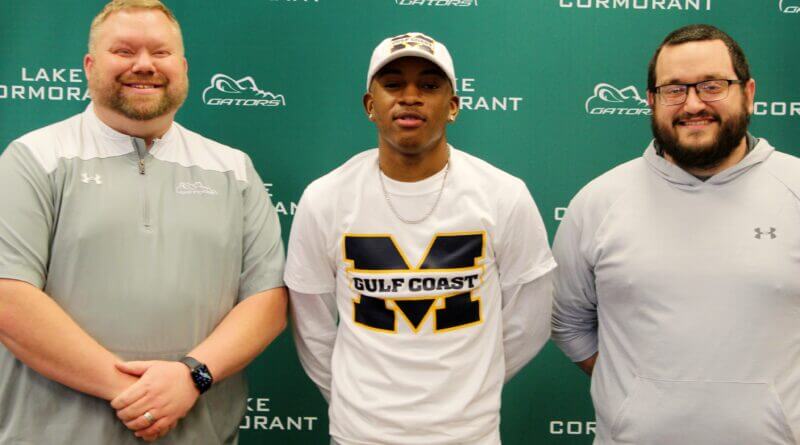 One of the most highly-regarded point guards among Mississippi high schools is the latest catch for Mississippi Gulf Coast Community College men’s basketball. Lake Cormorant’s Donovan Sanders Tuesday signed his letter of intent to play for the Bulldogs, based in Perkinston.

Sanders has earned several accolades during his four-year career with the Lake Cormorant Gators and coach Bryant Worsham thinks there may be a few more left for him.

“He’s one of the top point guards in the state,” Worsham said. “He’s in our 1,000 point club and he’s got close to 500 assists for his career. He’s been all-district the past two years and I’m sure he’ll get all-district again this year. Last year he was a member of the North-South All-Star Game.”

Sanders said he was impressed by the atmosphere among the college and his coaching staff, led by Tim Ryan, who is starting his first season with the Bulldogs after his hiring last May.

“They treated me like family, I felt like it was home,” Sanders said. “The coaching staff is great. Not every day do you get to be coached by a Hall of Fame coach, so I hope I get to soak up a lot of information from him.”

Prior to his arrival in Perkinston, Ryan was inducted into the Florida College System Activities Association Men’s Basketball Hall of Fame in 2014. His College of Central Florida team won the National Junior College Athletic Association’s Division I national championship in 2013. It’s part of a 17-year career Ryan had at Central Florida that ended last year when the school shuttered its basketball programs.

Worsham said Gulf Coast is getting a player with a ‘dogged’ determination to be the best.

“He’s going to bring leadership, toughness, a ‘dog’ mentality on the court,” Worsham said. “You’ll never have to worry about him not showing up with his ‘A’ game in practice, the weight room, on the court. We look forward to seeing him play at the next level.”

THrough 13 games this season, Sanders is second on the Lake Cormorant roster for points-per-game at 17.8. He leads the Gators at 3.8 assists-per-game and averages a team-leading 3.2 steals-per-game.