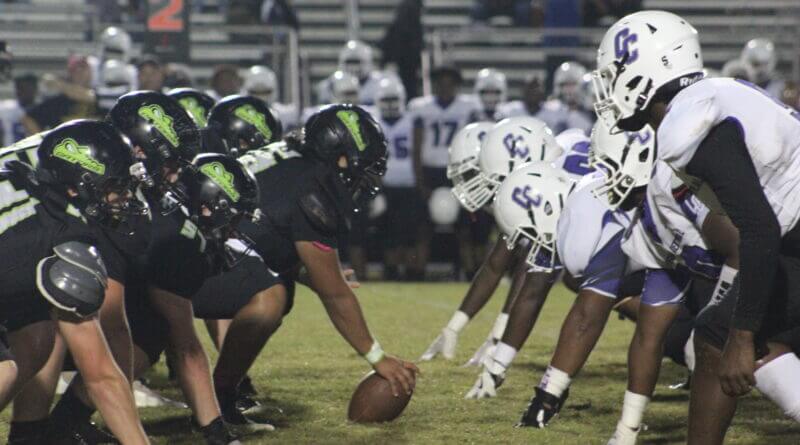 Friday night’s meeting between Cleveland Central and Lake Cormorant was a matchup between two of the top four teams in Region 1-5A after the first week of district play. It also was the second contest ever between the Wolves and Gators, which beat Cleveland Central 16-7 in a 2017 5A playoff game.

Friday, the opportunistic Wolves entered the Swamp and came away with a 25-14 victory to move among the top teams in the region standings at 2-0, 3-2 overall. Lake Cormorant dropped a game back to 1-1 and 3-3 overall.

It was a game Lake Cormorant coach Nick Nester thought they let slip away.

“Absolutely,” Nester said. “We felt like we absolutely let that game get away.”

Cleveland Central was opportunistic because a third-quarter punt block led to a touchdown when it appeared Lake Cormorant had started to take control of the contest. The Wolves also benefited from a fumble on what appeared to be a drive leading to a touchdown by the Gators, and a fourth-down measurement after a short yardage run by Jeremy Henderson appeared to be enough for a first down, but when spotted, the Wolves had held and kept the Lake Cormorant offense from keeping the late fourth-quarter drive going.

The Wolves opened the scoring with 2:20 left in the first quarter on an eight-yard run from quarterback Jaryn Kelly. The extra-point kick was missed to keep the score at 6-0.

The kicking game was a struggle for the Wolves much of the night, which also had a 28-yard field goal attempt earlier in the quarter miss the uprights.

There was no scoring in the second quarter, but there were three key plays in the 12-minute period of play.

An apparent scoring pass by Cleveland Central was negated by a holding penalty, Lake Cormorant quarterback Telvin Amos appeared to be leading the offense on a scoring drive when he fumbled and lost the football at the Cleveland Central 18-yard line after picking up some significant yards on a keeper play; and once again, the Wolves’ kicking game came up short as a 34-yard field goal attempt missed with 19 seconds left before halftime that would have put the visitors up by two scores heading into intermission, when the halftime scoreboard still read 6-0 Cleveland Central.

Lake Cormorant came out of the locker room at halftime and started to take over the contest. Actually it was Amos taking control, with a pair of rushing touchdowns for a 14-6 lead. His 47-yard scoring run with 8:20 left in the quarter was quickly followed by another, this time of 37 yards, when the Gators recovered a fumble on the kickoff after Amos’ first touchdown.

“The first half we started out slow, but the second half we came out great,” said Nester. “The next thing you know we’re ahead 14-6.”

But a play that swung the pendulum back in the Wolves’ favor came later in the third quarter when a blocked punt on fourth down put Cleveland Central in possession at the Gators’ three-yard-line. Running back Myles Griffin powered over from there to get the Wolves within 14-12 Lake Cormorant after a rushing attempt for a two-point conversion came up short.

“Even though we let them back in the game, it was still 14-12 at the start of the fourth quarter,” Nester said. “I thought we had great control of the game, but with the punt block we never really got back into it.”

Griffin would score two more touchdowns in the fourth quarter to put the game away. His second score of the night came with just over eight minutes remaining and would give Cleveland Central an 18-14 lead.

And when Henderson was stopped just short of a first down on a fourth-down call, Griffin finished off the ensuing drive with another two-yard run with 3:09 remaining, followed by the Wolves’ placekicker finally kicking a successful extra point for the final 25-14 score.

“On the fourth down call we just came up short,” Nester said. “We go for it on fourth down, we thought we had it, but the refs said we didn’t. I just hate that we let that slip away. I thought we should have had that game.”

One last chance by the Gators ended when a desparation Amos pass was intercepted near the goal line and the Wolves ran out the clock.