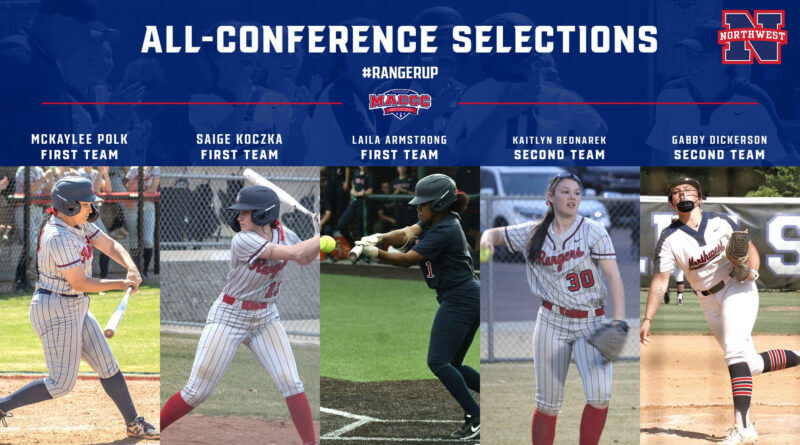 After earning the program’s first Region 23 title and a trip to the NJCAA Division II Championship tournament, the postseason accolades are beginning to roll in for the Northwest softball program.

Polk’s freshman season with the Rangers has been nothing short of impressive. The Senatobia product has amassed a .434 batting average with 18 doubles, 18 home runs and 61 RBIs, leading the team in all three categories. Her 18 home runs are a new single-season record and also lead the conference, while ranking within the top 10 among NJCAA Division II players.

Polk’s bat hasn’t been the only thing that has stood out this season. The freshman has anchored the starting role at third base all season, totaling 59 putouts and 54 assists for a .926 fielding percentage.

As the Rangers’ leadoff batter all season, Armstrong has been lethal at the plate, collecting a .414 batting average and a team-leading 72 base hits. The Olive Branch native and Tennessee State signee also ranks first in runs scored (64) and is 42-of-44 in stolen base attempts, a new single-season record.

Armstrong’s speed on the base paths have not only helped her set a new single-season stolen base record, but also a career record with 57 career stolen bases. She has also compiled a .982 fielding percentage while spending the season anchoring the center field role.

Koczka’s stellar 2021 season has rolled over into 2022, as the 2021 NJCAA and NFCA All-American ranks third on the team with a .401 batting average and second in doubles (12), home runs (12) and RBIs (51). The Southaven native and Memphis commit also ranks second on the team in runs scored (51), fourth in total hits (62) and has been walked 23 times, leading the team in free passes.

Now in the home stretch of her Northwest career, Koczka continues to top the career record books in several offensive categories, most notably career home runs (26), base hits (204), doubles (32), triples (6) and runs batted in (110). She has been the Rangers’ focal point in right field, garnering a perfect fielding percentage with 52 putouts and four assists in 56 total chances.

Bednarek has been another strong batter for the Rangers throughout her two-year career. The Olive Branch native and DeSoto Central alumnus has compiled a .350 batting average this season with nine doubles and eight home runs, ranking fifth in a single-season. Her 44 runs batted in are also good for fourth in the single-season record books and her 24 stolen bases rank fifth.

After switching primarily to left field this season from second base, Bednarek has also collected a .932 fielding percentage with 66 putouts in 74 total chances.

Dickerson has been nothing short of remarkable during her freshman campaign in the circle. The Olive Branch native and Lewisburg alum has developed into one of the top pitchers in the MACCC, collecting a 24-7 overall record and a single-season school record of 216 strikeouts, while totaling a 2.56 earned run average and 15 complete games.

Dickerson’s numbers have already made a dent in the program’s career record books, as her 24 victories rank fourth all-time while her 15 complete games are good for eighth. Her seven shutouts are third most in Northwest history and her 216 strikeouts are already second-most all-time, trailing only Lacie McCulley’s career numbers from 2005-06.

Northwest has tallied a 35-13 overall record, needing just one more win to tie the program’s record of 36 victories set back in 2007. The Rangers will await their seeding for the NJCAA Division II Softball Championship, which is set for May 24-28 in Oxford, Ala.