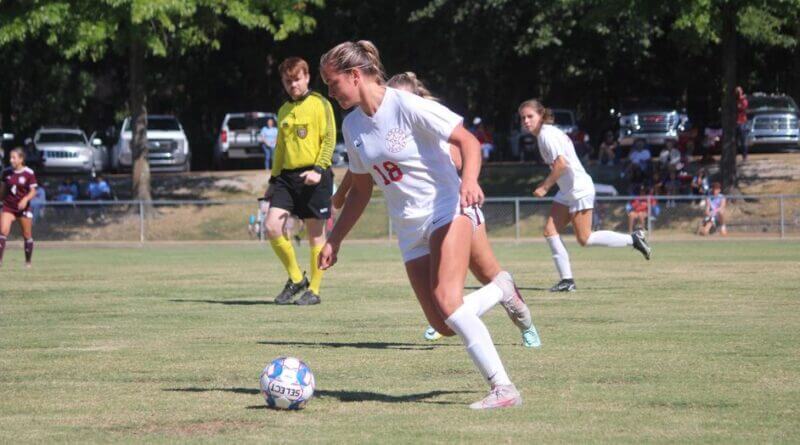 Crawford, a forward from Tupelo, recorded her second career hat trick less than 10 minutes into the match – but she didn’t stop there. The former Tupelo High School standout followed up with another goal just moments later, bringing the score to a 4-0 lead, then provided a late goal in the second half for her fifth and final goal of the day.

Not only did Crawford break a scoreless drought dating back to August 31, but the young striker also became the first Lady Ranger to score five goals in a match since September 26, 2006, joining Northwest Sports Hall of Famer Elyse Lovelace in accomplishing the rare feat.

“I was really surprised at myself after scoring the first three,” Crawford said. “I didn’t really expect that. But after scoring the first few, I realized that I was not satisfied, so I wanted to do what I could to keep going. Goals can change a match and there are a lot of great teams in our conference and the standings will get close, so every goal can make a difference and help us in the long run.”

Crawford’s first goal came in the third minute of the match, with her next three coming in the ninth, 10th and 12th minutes. Eliza Olive assisted her second goal and Bre’Aunna Harps provided the assist on her third score. Fellow freshman Raylin Dixon added an assist to Crawford in the 12th minute, effectively giving Northwest a comfortable 4-0 advantage.

Crawford’s final goal came in the 80th minute, thanks to an assist from sophomore Jennifer Enriquez, who continues to widen the gap atop the record books for career assists.

“I knew she had more in her than just three goals,” Beattie said. “She is physically imposing and just so difficult to defend. She’s left-footed but her first three goals came off her right foot, so that shows you that she is a player that has so many elements to her game. Normally when you’re matched up with a player, they have one or two things that they can do, but she has multiple things she can do that offset defenses.”

As for her late goal in the second half, Beattie says he wasn’t necessarily looking for Crawford to add another goal, but the situation worked out for her anyway.

“We really only brought her in for some fresh legs and to give someone a rest,” Beattie said, regarding the rotation between his starters and reserves. “She still scored anyway, so that certainly helps. We have such a good squad where we can trust every player that checks in, so we try to rotate as much as we can to take as much mileage as we can off any of our players.”

Elsewhere in the match, freshman Jadyn Duran tacked on her seventh goal of the season just before halftime, thanks to an assist from Avery Hooker. Enriquez extended the Lady Rangers’ lead to 6-0 just seconds into the second half, thanks to a penalty kick.

Freshman Kaley Harden broke a near-25 minute scoring drought with her penalty kick goal in the 72nd minute, while Hooker capped off the scoring in the 88th minute off an assist from Katie Archer.

An additional milestone was also reached in the victory, as Northwest scored the most goals in a conference or division match* since September 5, 2007, when the Lady Rangers defeated East Mississippi 10-3 in Scooba. (*see footnote below)

Northwest took a whopping 47 shots in the victory, limiting Hinds to just one the entire way. The Lady Rangers saw 25 of those shots come on-goal, while the lone Lady Eagles’ shot resulted in a save for starting goalkeeper Addy McCann.

Northwest also took 14 corner kicks in the match, while Hinds had none. After Anna Hoben was injured 12 minutes in, Harmony Porter finished out the remaining 78:35 as Hinds’ goalkeeper. The duo combined for 16 saves, with 14 of those going to Porter.

With the win, the ninth-ranked Lady Rangers improved to 6-1-1 on the season and 2-1-1 against MACCC competition. Hinds dropped to 1-6 overall and 0-4 in conference play.

Northwest will now turn its attention to Friday, September 30, as the Lady Rangers tangle with fourth-ranked Holmes in Ridgeland. The Lady Bulldogs have won 14 of the last 15 matches against Northwest, with the last meeting resulting in a 2-2 draw on October 26, 2021.

Kickoff in Ridgeland is scheduled for 3 P.M. or following the conclusion of the men’s match. Broadcast coverage will be provided by Holmes at holmesccmedia.com.

*NOTE: From 2002-21, the MACCC was split into North and South divisions. For 2022, the MACCC moved to a conference-wide schedule.)