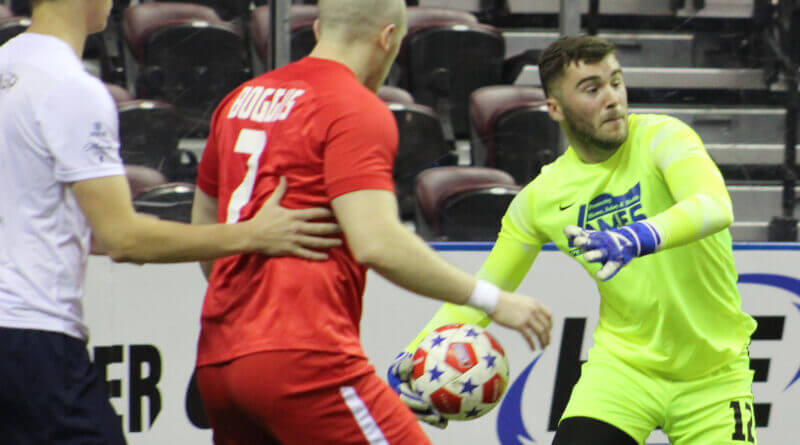 Likely pegged originally as a school day field trip game for the Memphis Americans, Tuesday’s 10 a.m. contests came just as students were coming back from Spring Break and classes were probably not going to take another day off that soon after the end of a week’s vacation.

Despite the lack of a fan following while rain was pouring down outside at the Landers Center in Southaven, the Memphis Americans offense did not take any time off with its two dominating victories over the Columbus Rapids.

Giovanni Alvarado, Djordje Djordjevic, and Mike Scharf each scored three-goal hat tricks for the Americans in their victory over the Rapids, the team’s sixth in seven meetings this season.

Alvarado, a former University of Memphis defender, gave the Americans a lead early with two of the first three goals scored in the game, netting Memphis a 2-1 first-quarter advantage.

In the second quarter, Mike Scharf scored the first of what would be his triplet of tallies on a set piece with 12:52 remaining before halftime.  However, Columbus would again answer when Thomas Eskew beat Americans’ keeper Matthew Klinck. The blast from the offensive yellow line made the score 3-2 Americans just 14 seconds after Scharf’s goal.

Later in the quarter, Djordje Djordevic’s goal through a screen at the top of the arc gave Memphis a 4-2 lead with 5:45 left before halftime. But again, Columbus answered with a goal exactly three minutes later with 2:45 left in the half from Niall Torracelli, a goal that got the Rapids back within 4-3 Americans.

Just 46 seconds later, Columbus tied the game at 4-4 on a goal from Sergio Barragan off a restart at 1:59 remaining.

But late-period heroics have occurred before for the Americans and they did again, when Scharf’s second goal of contest off a set piece would give Memphis a 5-4 halftime lead.

In the second half, Jacob Kisner tied the game for Columbus at 5-5 on a goal with 12:03 left in the third quarter.

But the Americans, able to wear down a short Columbus roster, scored the next eight goals to win going away.

Alvarado’s third goal of the game, coming with 10:59 left in the quarter, would become the game-winning goal for a 6-5 Memphis lead.

Djordjevic, on the power play, player-coach Corey Adamson, and Cesar Ramirez, all finished off the third quarter scoring for a 9-5 Americans lead.

Four more goals were scored by Memphis in the final quarter, Jowayne Laidley, Djordjevic on the powerplay for his third goal, and Scharf’s goal in the 22 seconds, along with an own goal scored by the Rapids, finished off the match and a 13-5 Memphis Americans’ victory.

Memphis, assured of second place in the regular season standings, improved to 11-5-0, while the Rapids fell to 4-11-0 and third place, which means the teams would likely meet in the postseason tournament to determine a league champion at Fayetteville, N.C. when the season is finished.

The Memphis Americans women’s team reeled off eight straight goals after allowing Columbus the first goal of the game in the 8-1 conquest of the Rapids Tuesday afternoon following the men’s contest.

Brianna Conley opened the game with a goal with 6:05 left in the first quarter for a 1-0 Rapids edge. But Molly Martin started the Memphis offense with a goal to tie the contest at 1-1 with 3:12 left.

It was all Memphis from that point on against the Rapids. Rebeka Pasikazia and Kristen Sparks tallied second-quarter goals for 3-1 halftime lead.

Alexis Catt, Kelsey Keown (twice), and Sydney Walker, all found the back of the net in the third quarter for a 7-1 lead, going into the final 15 minutes of play.

Bruna Leiria finished off the offensive push with the final goal, scored with 5:26 remaining in the contest.

Americans’ goalkeeper Angel Hailey was again stellar at the goal line, allowing just the opening goal of the game by Conley.

Memphis, assured of being the top seed in the post-season playoff tournament,  improved its season record to 14-2-0 and has now won six straight. Columbus fell to 5-11-0 and sits in third place in the league standings.

The Americans, which have three matches remaining, play their final home game at the Landers Center on Sunday, March 27 against the Rome Gladiators. Both teams take the field with the men’s team starting things off at 3:30 p.m.