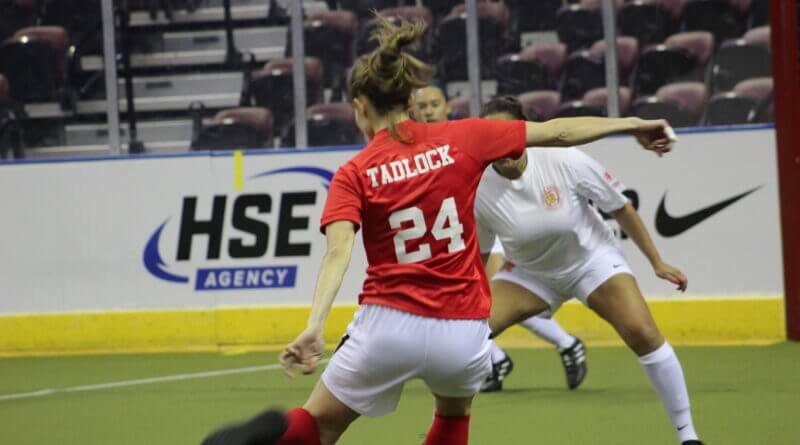 Kelsey Keown’s goal with 9:15 left in the women’s match completed a Sunday sweep of the Rome Gladiators for the Memphis Americans in National Indoor Soccer League play at the Landers Center in Southaven. The American women claimed a 5-4 win after the men opened the afternoon with an 8-3 victory.

Keown’s game-winning goal gave Memphis the lead after Bailey Tadlock’s second goal of the game came just one minute earlier to tie the match up at 4-4.  From there, Memphis was able to shut down the Gladiators to win their second straight of the weekend over the visitors, following Saturday’s 5-4 overtime victory.

“The two of us are probably the best two teams in the league and we showed it,” coach and general manager Corey Adamson said after the victory. “Each time we play it’s a one-goal game,” adding Sunday’s victory essentially locked up first place and the top seed for the post-season tournament.

Tadlock opened the scoring with 3:43 left in the first quarter for a 1-0 Americans’ lead. But Laila Espamer tied it up for Rome with 3:05 left in the half and Carlie Franks gave the Gladiators a 2-1 edge almost a minute later, which Rome would take to the locker room at halftime.

Loren Mitchell opened the second half scoring for the Gladiators with 12:18 left in the third quarter for a 3-1 lead but Jennifer Osmond answered for the Americans at the 11:08 mark to get the home group within 3-2 Rome.

Kristen Sparks of the Americans tied the match up at 3-3 with 7:19 remaining in the quarter, banging in a loose ball in front of Rome goalkeeper Melissa Hutto. However, this time Joy Ramos gave the Gladiators the lead back on a goal just before the third quarter horn sounded as Rome took a 4-3 lead into the final quarter.

Tadlock and Keown then produced the game-winning offense for the Memphis victory, while Southaven native and Memphis goalkeeper Angel Hailey responded with four key saves to pick up the victory.

Adamson described Keown’s clincher, a shot from the right side of the penalty box, as a “world-class” play.

“One v. one, I don’t think there’s a player in this league that has anything to do with her,” Adamson said. “She created it for herself, she got a girl who was in a bad spot because she was tired and the finish was absolutely world-class.”

Memphis outshot Rome in the women’s game by a 30-17 margin. Tadlock and Hailey were the number one and three stars, respectively, and Franks of Rome was named the number two star.

For the Memphis Americans men, revenge was sweet Sunday after Saturday’s disappointing 10-6 loss to the Gladiators.

After Adamson opened the scoring in the first quarter and Mike Scharf netted one early in the second quarter, Laidley scored his first of three goals with 10:39 left in the first half for a 3-0 Memphis lead.

Kevin Herrera answered for Rome with a goal with 3:40 remaining in the half, but Laidley scored again on a set piece less than a minute later for a 4-1 halftime lead.

Cedar Ramirez opened the second half scoring with a goal for the Americans just 43 seconds into the third quarter but Oscar Huerta answered for the Gladiators just over three minutes later with 11:10 left in third to get Rome within 5-2 Memphis.

The Americans would put the game away with three straight goals, a string that began with Samuel Castro’s tally with 7:18 left in the quarter and Laidley’s third goal of the game with 2:08 left before the quarter break. Djordje Djordjevic got a goal with 1:41 left in the match before Rigo Villanueva finished the scoring in the final minute of play.

Memphis outshot Rome 22-17 for the match with Americans’ goalkeeper Matthew Klinck getting the victory.  Klinck, a Southaven native, earned the number three star with Laidley named the first star and Djordjevic pegged as the number two star.

Adamson said it was important to his team to come away and rebound from Saturday’s loss, admitting his club may have been caught napping Saturday.

“It was the only thing we said in the locker room before the game started,” Adamson said. “It was ‘we do not leave this arena without a win.’ That was mentally huge for some of us who had tough games Saturday.”

Sunday’s victory for the men improved their record to 9-5-1, while Rome, which plays road games only this season without a venue to play home games at, dropped to 1-9-0.

TUESDAY BRUNCH AT THE LANDERS CENTER: The next home games for the Memphis Americans will be a 10 a.m. men’s start against the Columbus Rapids with the women’s match to follow. Rome returns to the Lander Center one more time this season for the Americans’ final home match of the year next Sunday, March 27, at 3:30 p.m. Two road matches, against Columbus and Fayetteville (N.C.) remain before the playoff tournament, when all four franchises converge on Fayetteville to determine a league champion.