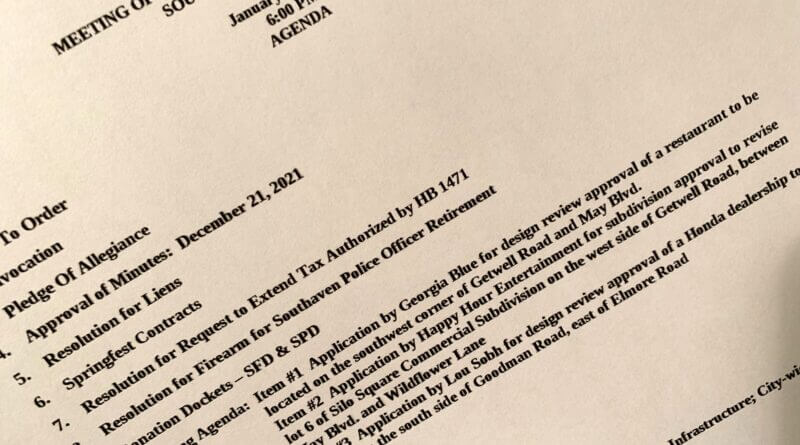 The DeSoto County Board of Supervisors meets at 9 a.m. on Monday, Jan. 3. Among the first items of business will be the election of officers for the coming year and the swearing in of election commissioners Barbara Chatham and Chad Engelke.

The agenda for Monday’s board meeting is found on the DeSoto County Government’s website.

Southaven aldermen on Tuesday at 6 p.m. are expected to pass a resolution asking the state Legislature to extend the “Penny for the Parks” one-percent local tax on restaurant sales. The authorization, which was House Bill 1471 in the 2018 legislative session, is now set to end on July 1, unless the legislature votes for an extension.

The board will hear about design plans for the new Georgia Blue restaurant and a commercial subdivision addition, both in the Silo Square area. A design review approval is also expected for the new Honda of Southaven automobile dealership on Goodman Road.

The agenda for Tuesday’s board meeting is found on the City of Southaven website.

A light agenda of sorts is facing the Olive Branch Board of Aldermen agenda Tuesday evening at 6:30 p.m. GIS Manager Scott Trapolino will be recognized as the winner of the Mayor’s Award for the month of December, an award given to nominated city employees named for going above and beyond.

The agenda for Tuesday evening’s board meeting is found on the Olive Branch City website.

A light agenda is also facing Hernando city aldermen on Tuesday evening at 6 p.m. The consent agenda items will include a vote on an application for a grant from the Mississippi Hills Heritage Area Alliance for historic programming at the “Dickens of a Christmas” event.  The grant is a 50/50 match.  Matching funds are in-kind and from sponsorships. Another grant application will be for the Mississippi Arts Commission for the same event, a 50/50 match is in-kind.

The Hernando Board of Aldermen agenda is available on the City of Hernando website.

The Horn Lake Board of Aldermen agenda was posted Monday morning, Jan. 3. Horn Lake aldermen will look to pass a resolution to ask the state Legislature to extend the city’s authority to levy a Hotel/Motel tax. An additional tax on lodging stays have been levied with city officials using the proceeds for economic development and the Legislature must be asked to extend the city’s authority to do that.

The agenda is found on the City of Horn Lake website.