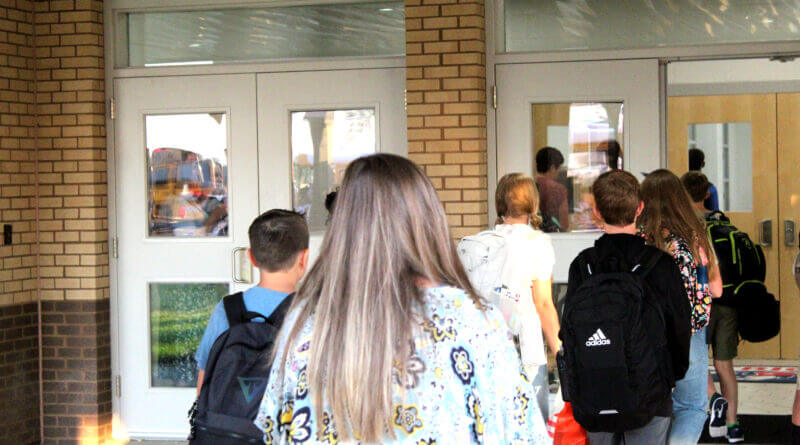 As many as 34,600 students either started school for the first time or returned to classes Thursday with the start of the 2021-22 year in the DeSoto County School District, the largest public school district in Mississippi.

With a new school year, the newness brings a bit of excitement and expectation. No where was that more prevalent as at Lewisburg Middle School, where about 1,000 students not only opened a new year, but a new building.

The first new building constructed in the district in more than 10 years, the new Lewisburg Middle began instruction Thursday functioning exceptionally well, save for traffic challenges with parents bringing the kids to class and encountering a major gridlock of incoming and outgoing vehicles.

Principal Brad Meadows said easing the traffic situation is going to be a “work in progress” and asked for patience. Aware that traffic off the two-lane state Highway 305 was going to be an issue, added lanes are being built to help ease traffic, DCS Plant Maintenance Director Jerry White said earlier this week, adding those lanes should be ready later this month.

Teachers who welcomed their new students Thursday expressed excitement about the start of the school year.

“It’s exciting and stressful, all at the same time, because you’re trying to prepare for your kids to be there, but you’re also trying to prepare a building, just to be ready for kids to actually be in it,” said eighth-grade science teacher Emily Frayser. “There’s a little bit more work in the front end than we normally would have.”

Cameron Taylor, a seventh-grade U.S. History instructor also drives a bus, and said he could sense that his bus students were also excited about the first day of classes.

“Everything is brand new,” Taylor said. “They all could not wait to get inside as we were waiting to pull inside the parking lot.”

While Thursday was the first day for the students, teachers and staff at Lewisburg Middle have been working the last several days getting their classrooms and the entire building ready.

Last year, questions surrounded the school year; whether there would be a school year at all, who would go virtual and who would appear in class, social distancing, and more. Taylor said while coronavirus remains a threat, this year has a more “normal” feel to it.

“Last year was a little bit of a mystery as far as what was going to happen,” Taylor said. “This year, as of right now, it seems pretty normal.  Everything seems back to normal. The beginning of last year, the kids were a little uncertain about things and I think the teachers were as well. This year seems a little more back to normalcy.”

“We are still going to practice social distancing, which we still feel like is important,” Frayser added. “The kids are not required to wear masks but we’re encouraging it. If they wear masks, they don’t have to be quarantined if they get exposed to a positive case. We are still going to be quarantining those who test positive, so those kinds of protocols are still in place. We want to be safe, we want the kids to be safe, that’s our number one priority.”