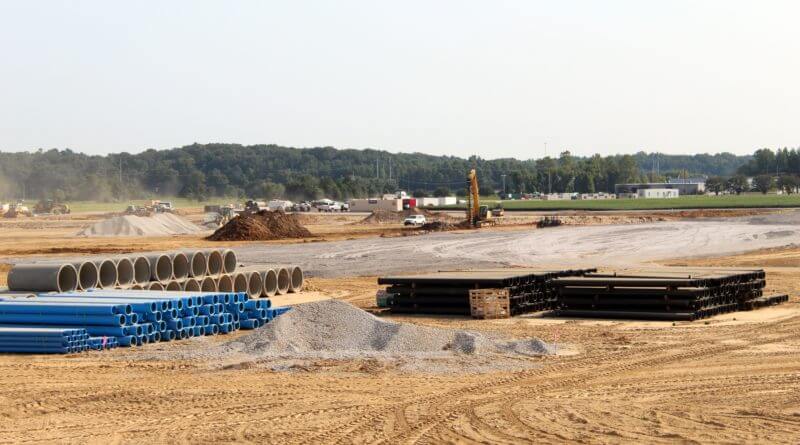 To say the DeSoto County seat of Hernando is a “happening” town describes much more than what the possible nightlife may be there. There are many things happening in Hernando right now.

Several projects are underway in and around the city of about 18,000, a number that is likely to grow as city officials work to add a linear park for walking and biking, finishing the resurfacing of the tennis courts at Church Park, and providing easier access into the city through the McIngvale Road interchange off I-269.

Some signs of the growth are already happening, such as the addition of 50 homes in the Crossroads subdivision off Highway 51 on the north end of the city.

“We’re very fortunate to have growth at this period of time,” said Mayor Tom Ferguson. “This will help us with our revenues for the city.”

A major get for the city, however, was the location of a new Associated Wholesale Grocers (AWG) warehouse being built off Highway 51 north of I-269. The grocery distributor plans to move its Memphis and Southaven operations to that location and start operations there in 2023.

DeSoto County News recently was given an exclusive look at that and other projects underway in Hernando, taking a tour of the projects with Ferguson, Community Development Director Gia Matheny, and Hernando Main Street Chamber of Commerce Executive Director Sibonie Swatzyna.

The AWG complex has been under construction since groundbreaking was held in mid-July. Tippman Construction is involved in the project, which will cover 241 acres and include a 945,000 square foot building. Total cost of the project is about $300 million.

About 50 workers are currently involved in the site preparation and project manager Jason McKinney said the number should grow to between 500-600 workers to complete what will house about 600 AWG employees when operations start in about three years.

Down the road from the new AWG facility is where the Mississippi Department of Transportation is in the midst of constructing a new McIngvale Road interchange, Hernando’s connection with the newly-built I-269 and the city’s second interchange to the interstate system that includes I-55.

Tanner Construction of Ellisville is involved with the $7.9 million interchange that started earlier this spring. Projections are that it should be open in May 2021. Estimates are the cost of the interchange will be in the $8 million range.  The McIngvale Road interchange is one of six MDOT projects currently being done in northwest Mississippi.

“DeSoto County is booming,” said project superintendent Steven McGee when asked about all the road work underway. McGee said Tanner Construction also built part of I-269 from the Tennessee state line to its connection with I-69 and I-55 on the north end of Hernando.

To make the McIngvale Road interchange possible, a redirected McIngvale Road connection needed to be built that is being routed east of the current roadway behind Hernando Hills Elementary and go from Green T Road to Byhalia Road.

Pickering Firm Inc. is overseeing the new McIngvale Road project consisting of a five-lane roadway, a 10-foot wide bike and pedestrian trail and sidewalk to connect to the linear park project. Estimated cost of this roadway construction is nearly $8.7 million with federal highway money covering 80 percent of the cost. Hernando and DeSoto County are equally sharing the remaining 20 percent of the cost.  The roadway should be ready for use in about one year.

As a linear park, the paved trail along McIngvale Road will run for about 1.6 miles and later extended to about 2.5 miles from Byhalia Road to Lee’s Summit behind the Walmart Supercenter. It’s an important new addition for the city, said Matheny.

“Not only is it there for the recreational aspect, but it’s another form of alternative transportation for our residents,” Matheny said. “We have a large biking community with the only bike club in the county that includes over 100-150 riders. They don’t really have a place here in the city to safely ride so they end up leaving Hernando to go somewhere else to ride. Now they’ll have an opportunity to do that here.”

Matheny added the linear park will boost home values through its easy access to the eastern part of the city.

Phillips Construction of Columbus, Mississippi is in charge of the linear park at a cost of about $1 million. As a linear park, the project is eligible for state money of which will come about 80 percent of the cost with the city kicking in about 20 percent.

Another project ready for use involves resurfacing the tennis courts at Church Park, courts that were badly in need of repair. The $16,000 price tag for the project included donations from the Mississippi Tennis Association and the Northwest Mississippi Tennis Association.  The nearby parking area is being resurfaced along with the courts that have lines for junior tennis play as well as regulation tennis lines.  The area will be compliant with the Americans with Disabilities Act, or ADA.

“Hernando, for quite some time, has really focused on the health of the community,” Matheny explained. “Quality of life is a big component of Hernando as is the unique, quaint feel of our town and the historic piece that it brings to all of our residents. We’re doing a lot of the things that will benefit the community in more ways than one.”

Hernando officials also look at other happenings in the city, such as the Wesley Meadows Retirement Community’s Green House Home, one of 19 similar homes in the Methodist Senior Services system.  The concept provides living facilities for seniors dealing with memory issues.

The 5,000 square foot home, scheduled for completion early next year, has benefited from a $450,000 donation from the Homer Skelton Foundation and money has been matched by the Maddox Foundation. An additional Maddox match was offered to provide a maintenance endowment of $500,000. Total cost of the project is about $1.7 million.

Joe Frank Lauderdale and Lee Ashcraft are the co-chairs of the fundraising effort for Wesley Meadows.  Lauderdale is involved separate from his work as City Engineer for the City of Hernando.

All of this, and there’s more going on, are all solid indications of the attraction Hernando has to new residents and new business.

“It adds value to everything that the Chamber is trying to do to promote the businesses and to promote what all we have going on,” Swatzyna said. “It makes everything desirable for somebody to come and start a business here, but not only that, to live here.  We have a lot to offer a business and to future residents.”

“I think we’re about the last city in DeSoto County to really have growth,” Ferguson added. “New additions really like our business-friendly atmosphere and we’re working to attract businesses and people.”

3 thoughts on “Several projects are happening in Hernando”