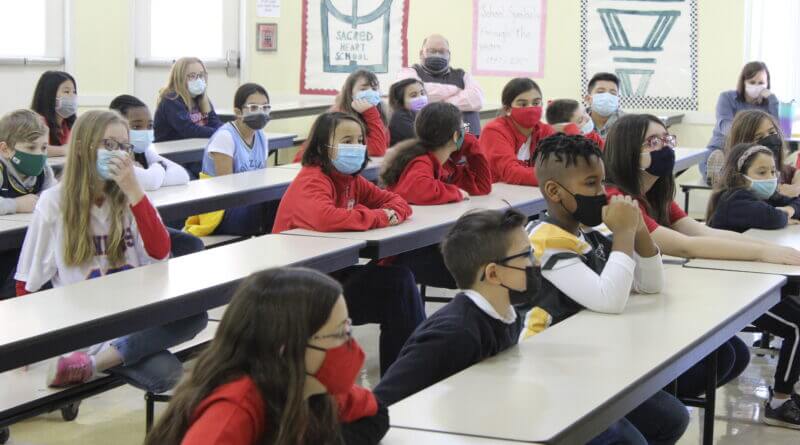 Catholic schools across the country are celebrating National Catholic Schools Week, including Sacred Heart School in Southaven, which Monday welcomed several people representing many facets of DeSoto County to speak to the students.

National Catholic Schools Week is being celebrated through Friday, Feb. 5.

The theme of the day at Sacred Heart School was “Celebrate Your Community.” Among those who came to present their work in the community were representatives of the Southaven Police Department, Sacred Heart Southern Missions, United States Postal Service, and Robert Long, curator of the DeSoto County Museum in Hernando.

Long spoke with fourth and fifth graders in the school cafeteria about the prehistoric history of DeSoto County, long before Hernando DeSoto traveled there. He explained the area at one time was actually part of the Gulf of Mexico, with the waters reaching beyond and to the north of what today is DeSoto County.

As the waters receded, the area was home to dinosaurs, wooly mammoths and other creatures, with Long welcoming a T-Rex and her baby into the room for the children to see.

Long said examination of the fossilized remains point to the food preferences of the dinosaurs. Later, the Chickasaw Indians would settle in the area and they would be here when the white settlers arrived.

The museum curator hopes the students will gain a better appreciation of the historic past to learn its lessons for the future.

“When you look back along a long sweep of time you see that there were whole civilizations that were here, whether they were dinosaurs, whether they were Native Americans,” said Long. “We learn from the past, we learn from the mistakes of the past, what worked and what didn’t, and we gain an appreciation to preserve what we have left. All we have to do is open our eyes and look around. History is everywhere.”

Sacred Heart School teaches youngsters from pre-K 3 to grade eight and is located at 5150 Tchulahoma Road in Southaven. Bridget Martin is the school principal.

National Catholic Schools Week invites the community to learn about the value Catholic education provides to young people and its contributions to the church, communities and the nation.