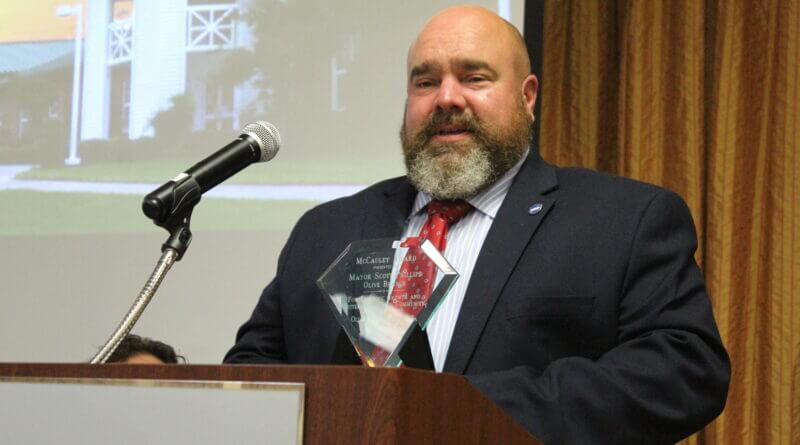 Outgoing Olive Branch Mayor Scott Phillips has been recognized for his work toward economic growth and the overall betterment of the DeSoto County city.

The McCauley Award is given by the chamber in honor of the man who helped start the local business organization.

Chamber Board Chairman Jason Shifflett said there was no one more worthy of the recognition.

“Under the Mayor’s leadership, the last eight years have brought a period of economic growth to Olive Branch that is among its most prosperous in its 133-year history,” Shifflet said.

It was noted that Olive Branch was the state’s eighth-largest city when Phillips took office in July 2013, with a population of just under 35,000 people.  Including the estimated 6,600 people added in the recent annexation, Olive Branch’s population is now over 47,000, putting it right there with Biloxi as the state’s fourth-largest city, behind Jackon, Gulfport and Southaven.

The city has also grown in commercial and industrial development, Shifflett said.

Shifflett added there have been more than 33 new retail and office buildings and 26 additions since 2013. The city has also acquired the Olive Branch Airport during Phillips’ tenure, among the largest private-to-public airport acquisitions in history. He also mentioned the annexation of 18.8 square miles, the largest, most significant annexation in the state in the past 25 years, and the city’s low property tax rate, the lowest city tax rate in DeSoto County.

“Mayor Phillips is clearly deserving of the McCauley Award for his work in keeping Olive Branch one of America’s most livable, affordable, and vibrant cities,” Shifflett said.

“I can’t take all of the credit for all that has gone on in the City of Olive Branch,” Phillips said. “I’m very excited for what the future holds for the city. Mayor-elect Ken Adams will do a fantastic job and the Board will continue to do well for our great city.”

DeSoto County Schools Supt. Cory Uselton was the guest speaker at the Wednesday luncheon, where he described how the state’s largest school district was able to get through the past year in the coronavirus pandemic.