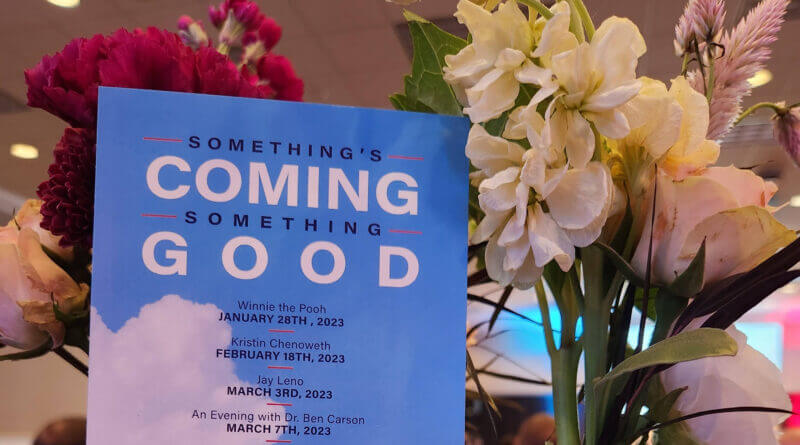 Something’s coming… Something good is coming to the Northwest Center for the Performing Arts.  The inaugural 2023 season will bring a wide variety of performances from award-winning performers and guest speakers to film series and local talent. Totaling 16 performances and a film series, the Center for the Performing Arts is bringing world-class entertainment to not just campus, but the entire Northwest Mississippi community.

Headlining this season is Tony Award-winning actress and singer Kristin Chenoweth, Emmy Award winner Jay Leno, former Presidential candidate Dr. Ben Carson, and Oscar Award winner Billy Bob Thornton and his band The Boxmasters.  There will also be stunning performances from touring acts such as Disney’s Winnie the Pooh, Pirates of Penzance, and Pinkalicious and so much more!

Jan. 28, 2023: Disney’s Winnie the Pooh-  Disney’s iconic Winnie the Pooh, Christopher Robin and their best friends Piglet, Eeyore, Kanga, Roo, Rabbit, Tigger and Owl have come to life in a new musical stage adaptation. Featuring the Sherman Brothers’ classic Grammy Award-winning music with additional songs by A.A. Milne, this innovative and fresh stage adaptation is told with stunning life-sized puppetry through the eyes of the characters we all know and love in a new story from the Hundred Acre Wood.

Feb.  18, 2023: Kristin Chenoweth, For the Girls- Sponsored by Eley Guild Hardy Architects. Emmy and Tony Award-winning actress and singer Kristin Chenoweth hits the stage for an incredible evening of live music! Best known for originating the role of Glinda in the Broadway musical Wicked, Chenoweth is a classically trained opera singer whose career spans film, television, voiceover, and stage. She’s portrayed notable roles in Pushing Daisies and Disney’s Descendants and continues to perform to sold-out audiences across the world, including performances at Carnegie Hall and Royal Albert Hall

March 7,: An evening with Dr. Ben Carson-  Dr Benjamin S. Carson, Sr., M.D., is Founder and Chairman of the American Cornerstone Institute, a new think tank/do tank whose mission is to promote the 4 founding principles which are cornerstones of our country – faith, liberty, community, and life as well as pursue common sense solution that challenge conventional groupthink. He most recently served as the 17th Secretary of the U.S. Department of Housing and Urban Development.

March 11: Donny Edwards, An Elite Tribute to Elvis-  Sponsored by The Chancellor’s House by Oliver, Donny Edwards is an international, multi-award-winning professional Elvis tribute artist. Today, he is one of the most sought-after performers in the business, bringing his show to stages and production shows world0wide. He is a versatile performer with the ability to re-enact each era of Elvis’ life and career.

March 29: The New York Gilbert and Sullivan Players Present: The Pirates of Penzance– Have you ever wanted to be a pirate? Set sail with this classic comedy that boasts one of the most famous patter songs in musical theatre history. On the coast of Cornwall, a brand of tenderhearted pirates celebrates the coming of age of Frederic, who was mistakenly apprenticed to the pirates until his 21st birthday. Now, Frederic has vowed to devote his life to the extermination of piracy until a ludicrous leap year snag threatens to keep him apprenticed to the pirates for life! Come see what The New York Times calls “An endearing production with high musical standards and spirited performances.”

April 22nd: Pinkalicious, The Musical-  Sponsored by Brown Insurance Agency, Pinkalicious  is a musical about how Pinkalicious can’t stop eating pink cupcakes-despite warning from her parents! Her pink indulgence lands her at the doctor’s office with Pinkititis, an affliction that turns her pink from head to toe! When the hue goes too far, only Pinkalicious can figure out how to get out of this predicament.

May 11: RAIN – A Tribute to the Beatles- Come together and hear the best of Abbey Road and the Rooftop Concert performed live!

May 13:  Bobby Rush & his Band-  Grammy winning Bluesman Bobby Rush is hailed as on of the blues’ best storytellers, which shines through during his live shows. The two-time Grammy-winning legend and Blues Hall of Famer incorporates humor, prolific guitar, and harmonica playing into his stunning performers.

June 10: Billy Bob Thornton and the Boxmasters-  Formed in 2007, the Boxmasters have recorded an impressive and diverse catalogue of music that touches on their love of wide array of influences but most importantly the rock and roll of the 1960s .

June 29- July 2: The Music Man-  A local production of Meredith Willson’s The Music Man where audiences will follow fast-talking traveling salesman, Harold Hill, as he cons the people of  River City, Iowa, into buying instruments and uniforms for a boys’ band that he vows to organize with no musical knowledge. Auditions will be open to the community in Spring of 2023.

July 27- 30: Seussical Jr.-  A local, all youth production weaves a story of friendship, loyalty, and love. Despite all odds, Horton and Gertrude band together to save the Whos, free Horton, and restore peace and unity to the Jungle of Nool. Auditions will be open to the community in Spring of 2023.